Lawyer With A Mission

Lawyer with a Mission

He travels the country and the world to combat injustice and create new legal resources for communities in need. Along the way, his life is enriched by the people he helps.

In the misty summer rain, Fred Rooney ’75 surveyed the site of the 1964 New York World’s Fair in Queens, remembering how inspired he was as an 11-year-old boy when he first saw the giant sculpture called the Unisphere—a 700,000-pound, 12-story, 120-foot diameter structure built by US Steel as the centerpiece of the pavilions of 80 nations and the exhibits of major world religions. With its theme “Peace Through International Understanding,” the fair so captivated Rooney that he returned again and again.

The experience was his first hint of what the world held for him: the places, people, food, music, art, and ideas of our time. The boy—one of 51 million visitors from around the world—went on to spend his adult life opening new doors for people in need here and throughout the globe.

As a successful attorney-at-law, the creator of an innovative program called the Legal Incubator, a Fulbright Specialist bringing the incubator to young lawyers everywhere, a member of the American Bar Association's Latin America and Caribbean Law Initiative Council, and a hospice volunteer in his own community, Rooney has won many accolades and awards. But what motivates him is his belief that we have a higher calling to help our fellow humans achieve basic rights like safety and security; a place to live; the right to education, employment, and medical care; a fair wage; and access to legal justice.

Teacher and student, innovator and leader, helper and hero, in his professional life around the world and in his hospice work at home, he is a compassionate and dedicated advocate for justice for all.

“Everything I give, I get something in return—at least three times as much, and many times much, much more.”

It’s a Small World After All

Growing up, Fred Rooney knew little of the world outside the boundaries of a comfortable upbringing in the Long Island village of Garden City. In 1964, all that began to change, and the world’s fair was just the beginning. In the fourth grade, his teacher taught the class to count to 10 in Spanish. “That was it for me,” he says, “I was hooked.” He began to meet Latin Americans on Long Island, and his exposure to Central and South America grew.

In high school, Rooney had been voted most popular and was president of his senior class, but academically, he says, “I was not in the top 10 percent.” The tight-knit community and liberal arts courses of Moravian College attracted him to the school; he felt they fit his needs culturally and academically. At Moravian, he was proud to join the Omicron Gamma Omega (OGO) fraternity and enjoyed campus life.

Rooney believes that his experiences during his junior year studying Spanish in Bogotá, Colombia, transformed him, revealing life through a new lens. “Every time I opened the door on the way to class, I saw people suffering from despair, poverty, oppression, and inequality,” he says.

Returning to Moravian for his senior year with this newfound awareness and command of the Spanish language, he met political science professor emeritus and author Gary Olson, whom he credits as being “the most influential person in changing my life.” What he learned from Olson, he says, “helped me make the rough transition from my carefree frat-boy existence to someone with a mission.” Olson’s class had a remarkable impact on him, opening his eyes to world economics and giving him a deeper understanding of political issues. He graduated with a BA in Latin American Studies and a desire to help others. 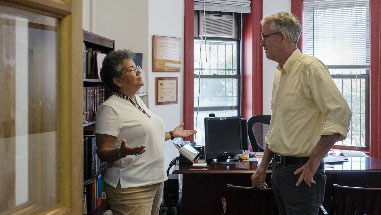 Attorney Mercedes Cano is a longtime friend of Rooney’s, and one of the lawyers who benefitted from the beginnings of the Legal Incubator at CUNY School of Law. Rooney took us to her law office on 82nd Street in Jackson Heights, the heart of “Little Colombia,” where for more than 18 years she has been a force serving immigrant families in the US. 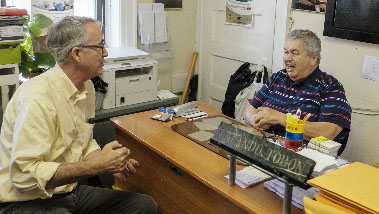 Rooney visits with friend Orlando Tobón, who runs Orlando Travel and is a resource for Colombians in the United States. 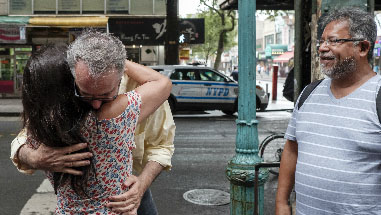 On one of the main streets of the Queens neighborhood that is home to a rich mix of Central and South Americans and Caribbeans, Rooney bids goodbye to friends Teresa Galicia and Eduardo Libreroš. With so many friends from around the world, he is generous with his time and help, even his home, which is often a haven for visitors. In this bittersweet moment, he is visibly moved, even though they are just parting for a while. 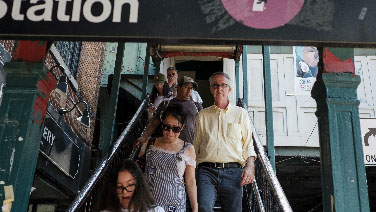 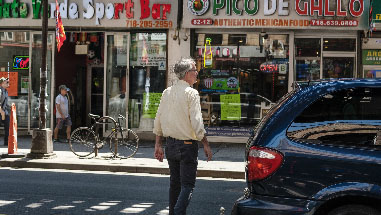 View a BBC report on a legal incubator in Pakistan aiding victims of domestic violence.

Doing Well to Do Good

After college, Rooney did social work with the Spanish-speaking community and taught English to adult immigrants in the Lehigh Valley. Realizing he needed an advanced degree to have more to offer, he studied for his MA in bicultural/bilingual studies at Scranton’s Marywood College, graduating in 1982. The following year he started work on his law degree at the City University of New York (CUNY) School of Law in Queens, earning his JD in 1986.

Back in Bethlehem, Rooney joined another young lawyer, Michele Varricchio, and started a small, private, community-based, bilingual law practice. When it came to running the firm, hiring a staff, building a client base, establishing fees for moderate-to-low-income clients, offering pro bono work, doing marketing and PR, and using the latest technology, he says, “We didn’t really know what to do. In law school, we had learned about the law, but not about how to manage a business.” He struggled to make enough to support his young family. In time, through trial and error, he discovered how to “do well to do good.”

Doing well, Rooney explains, means being successful enough to do good: to offer pro bono and lower-cost services to help people who otherwise would lack access to the justice system. “I learned fairly soon after I got out of law school I couldn’t change the world,” he says, “but I could help improve the lives of individuals, one person at a time.” In 1994, the Pennsylvania Bar Association commended Rooney’s law practice for its pro bono work.

Rooney’s next mission was to apply what he had learned to help new law school graduates. In 1998, he returned to CUNY Law School to become the director of the Community Legal Resource Network, where he helped develop the first Legal Incubator, which launched in 2007. The American Bar Association (ABA) now defines Legal Incubators as “models that enable newly admitted lawyers to acquire the range of skills necessary to launch successful practices that expand access to legal services for those of low and moderate incomes.”

Pedro Rivera’s pro bono work for 26 families living in a substandard apartment building in upper Manhattan was one of the CUNY Incubator program’s first notable successes. The landlord, who was trying to get the families to move out so he could replace them with higher-paying tenants, denied basic services and hiked their rents. Rivera was able to prove the tenants’ case to the court and get them a year’s rent abatement.

With the Legal Incubator program up and running in the US, Rooney was ready to go global. Since the first program at CUNY, more than 60 institutions in the US and worldwide have adopted the system. In 2012, the US Department of State awarded Rooney a Fulbright grant to give lawyers in the Dominican Republic the tools and resources to help indigent Dominicans and marginalized Haitians working in the country. This program was the first Legal Incubator outside the US. In 2013, the ABA named Rooney "Father of Legal Incubators” and called him a “Legal Rebel.”

In early 2014, the State Department added Rooney to its roster of Fulbright Specialists, who, the program says, “represent a wide range of professional and academic disciplines...competitively selected to join the Fulbright Specialist Roster based on their knowledge, skill sets, and ability to make a significant contribution to projects overseas.” For the past four years, Rooney served as a Fulbright Specialist in Islamabad, Pakistan, working with local lawyers to build systems to strengthen their practices and serve the needy and endangered, such as women suffering from violence and sexual abuse without access to legal help. He has also introduced the Legal Incubator program to lawyers in Cordoba, Spain. The system is attracting attention in places like Nairobi, Kenya; and Bucharest, Romania; and in the Gambia in West Africa and the West Bank of Palestine.

In August, Rooney started his work as a Fulbright Specialist in Sofia, Bulgaria, preparing young Roma lawyers there to serve the marginalized Roma community and uphold their rights in a hostile political and social environment. Later this fall, Rooney will travel to Palestine to identify ways to collaborate with the United Nations Development Program (UNDP). In nearly 170 countries and territories, the UNDP works to help “develop policies, leadership skills, partnering abilities, institutional capabilities and build resilience in order to sustain development results.”

For those who seek ways to “fight the good fight of freedom” and help others, Rooney offers what he has learned:

When Rooney is not traveling the globe as Fulbright Specialist, he serves as a volunteer at the Lehigh Valley Health Network (LVHN) Hospice and St. Luke’s University Health Network (SLUHN) hospice programs in the Lehigh Valley. As Hospice Volunteer Coordinator Lynn Schiavone says, he is one of “the silent angels: humble volunteers who seek nothing but the chance to help others.”

Every case is different. When one elderly hospice patient lamented missing delicious home-cooked food, Rooney shopped for ingredients and prepared weekly meals for her. A Spanish-speaking immigrant mother was dying in Pennsylvania, far from her seven adult children in the mountains of Ecuador. Rooney was able to take her home to be with her family. He is still close to them and has become godfather to her niece’s child.

In Rooney’s kitchen hangs a photo of the historical figure he admires the most: abolitionist and women’s-rights activist Sojourner Truth, born into slavery in upstate New York in 1797. She escaped with her daughter in 1826 and won freedom in court for her son two years later. Rooney finds hope from the image every time he sees it. As Truth said, “Life is a hard battle anyway. If we laugh and sing a little as we fight the good fight of freedom, it makes it all go easier. I will not allow my life’s light to be determined by the darkness around me.”

Inspired by Truth and the knowledge that nothing is insurmountable with the help of others, Rooney is committed to creating a better world, one person and one project at a time.