One Campus, Many Worlds

Faculty panelists lead dialogue about diversity on and off campus 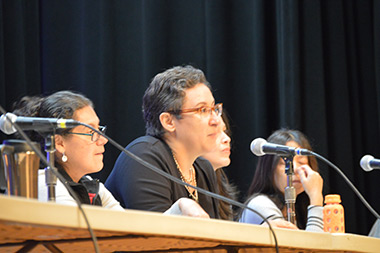 Moravian College hosted Voices of Diversity, an event to encourage this cultural awareness on Tuesday, September 22 in Prosser Auditorium. John Reynolds, professor of political science, organized the panel, during which eight faculty members from the College, and also from around the world, spoke about their own experiences with cultural identity and ethnicity. In personal anecdotes and collective discussion, the panel addressed the challenges faced by people from different ethnic backgrounds living in predominantly white communities. Their responses to the main question, “How significant is your racial or ethnic background in regards to their identity?” although varied, carried the same message to students about empathy, understanding and open mindedness.

The panel goes hand-in-hand with this year’s InFocus center of investigation: Poverty and Inequality.  “This event brings together diverse voices from across the disciplines in order to help us think critically about our own discursive contributions to a more productive, innovative, and compassionate society," says Tabor, associate professor of English and a co-chair of this year’s InFocus program with Sonia Aziz, associate professor economics. “It is our hope that this panel encourages our students and our campus community to step outside of their comfort zones,” Aziz adds.

Keshodkar and Sethi stressed the importance of accepting individual identity, not fighting it. From their experiences, they learned their identities were an inescapable part of them. “I was first able to talk to someone about my identity who was in the similar situation and now that I’m a parent, I don’t want to hide it,” Sethi said. “I feel like I can talk to people and share my experiences. I am first an American no matter what.”

But change won’t come without action. Farbod encouraged the importance of becoming actively engaged, wherever one might be, to improve the world around us. “We are living in a transnational moment,” Farbod said. “When you live in a transnational moment, the question of identity becomes pragmatic. Wherever you are, you should act there to improve the world.”

Aguilar and Mesa spoke of the influence language has on a culture, “I don't see why speaking more than one language is such a problem in America. People seem scared or suspicious of branching into other languages and to me it’s an advantage,” says Aguilar. Mesa followed on the heels of Aguilar-Rodriguez’s comments on language and its importance. To her, language is truly the unifying factor that connects someone to their identity and thus, to their country, “Language builds an empire. How do you become a political person in a place where you do not know the language? Involving yourself in politics in that particular country enables you to feel more a part of that country truly and to feel like an American.”

Yayoi Kato shared her thoughts on how racism develops and why, “The beginning is curiosity, innocent, really, but racism grows from this.” When does racism truly begin? Part of how she formed her identity stemmed from the environments in which she grew up and then from learning how to deal with the fact that she was unique.

The adversity that these panelists faced in their personal experiences serve as driving forces that push them redefine societal expectations. “My race and ethnicity defined who I am today. It guided my career and my path and my passion,” Madrid said. “I took a lot of those negative stereotypes to prove everyone wrong.”

The conversation about diversity isn’t over at Moravian College. Open dialogues about ethnic identity and diversity are imperative on college campuses today, especially as Moravian College becomes a more global campus. “The demographics of the nation are changing and the issues of immigration and cultural identity have risen to a high level of visibility and political conflict nationally,” said Reynolds. “Within this context, it is important for Moravian College (and other institutions as well) to consider and deliberate over the meaning of difference, the values of diversity and the benefits of embracing the changes that are underway.”

Events such as Voices of Diversity are meant to expand students’ vision, empathy, and gain a higher perspective to create a balanced and diverse world. Khristina Haddad mentioned that Americans purposefully avoid the subject of race because, “It’s rude to talk about things that matter. Offend someone today, offend them constructively. This avoidance of the direct confrontation is uncomfortable for most people.” However, panelists agree that direct confrontation of subjects that matter is what the world needs in order to move forward progressively and take the next step into discussions that meet these sorts of challenges unequivocally.

“As I read over my scribbled notes while listening to my esteemed colleagues, I found the word ‘access’ written all over my notebook,” Aziz reflected. Aziz views access as a word that recurs when one investigates inequality, whether it is access to affordable health care, transportation to a voting booth, and much more. “If we ourselves do not encounter barriers to access, they remain unacknowledged, invisible. Our colleagues have shown us a great kindness in inviting us to join them in a gentle challenge to leave our comfort zones—to cast doubt on what you think you know—to be uncomfortable.”