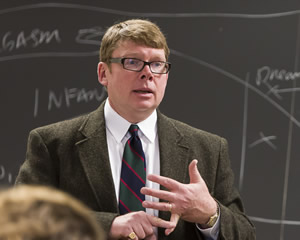 Bethlehem, Pa., September 18, 2014— Dana S. Dunn, professor of psychology and assistant dean for special projects at Moravian College, was awarded a Presidential Citation from The American Psychological Association’s Division 2 – the Society for the Teaching of Psychology (STP).

“Dana has been impressively generous and generative within STP,” said Landrum, noting that Dunn has edited or co-edited many of the books that emerged from the organization’s annual Best Practices conference. “We are a better organization due to Dana generously sharing his expertise with teachers of psychology worldwide.”

The Presidential Citation was presented to Dunn at the organization’s recent business meeting, held in conjunction with the American Psychological Association (APA) annual convention in Washington, D.C., in August. The award is presented to individuals who have made extraordinary lifetime contributions to the society and/or to the teaching of psychology. This year, more than 4,000 candidates were considered, according to Landrum.

Maureen McCarthy, professor of psychology at Kennesaw State, Kennesaw, Georgia, was also a recipient of the society’s Presidential Citation. A maximum of two such awards are presented each year.

“This award was a very nice surprise. I was touched,” said Dunn. “It is always humbling to be honored by one’s peers. Working with the organization all these years – and with such a great group of people – has been very gratifying.”

Dunn began working with the society in the late 1980s, becoming, what he called “very active,” in the early 1990s. His involvement included serving as STP president in 2010.

Landrum commended Dunn for his years of service, whether it was as president, editor, task force member or committee chair. “Let me also tell you that Dana is also one of my favorite authors – whether it be his writing about writing, research methods, or his Psychology Today blog – Dana is an author's author,” he said.

To date, Dunn has authored or co-authored more than 150 articles, chapters, and book reviews, and he has written or edited 19 books, not counting texts with multiple editions. He has focused his scholarship on examining teaching, learning and liberal education, as well as the social psychology of disability.

This recognition from STP comes just a year after Dunn was presented with the 2013 Charles L. Brewer Award for Distinguished Teaching of Psychology from the American Psychological Foundation (APF). The Brewer Award is given by the APF, the philanthropic branch of the APA, in recognition of a “significant career of contributions of a psychologist who has a proven track record as an exceptional teacher of psychology.”

Involved with several professional organizations and affiliations, Dunn is on the Board of Trustees for the Foundation for Rehabilitation Psychology. He is also a fellow of the APA, the Association for Psychological Science and the Eastern Psychological Association. Additionally, Dunn is editor-in-chief of Oxford Bibliographies: Psychology, an online resource, and a frequent peer reviewer.

Most recently, Dunn was appointed by the APA’s Board of Educational Affairs to serve as the chairperson of a national task force. Dunn and eight other psychologists who also have expertise in undergraduate education and assessment will craft recommendations regarding how to recognize highly effective undergraduate psychology departments in the U.S. that have a curriculum based on the APA Guidelines for the Undergraduate Psychology Major 2.0.

Moravian College is a private coeducational liberal arts college located in Bethlehem, Pennsylvania. Tracing its founding to 1742, Moravian is recognized as America's sixth-oldest college and the first to educate women. The College emphasizes the deliberate integration of a broad-based liberal arts curriculum with hands-on learning experiences to effectively prepare its 1,600 students, not just for jobs, but for successful careers. Moravian College excels at transforming good students into highly competent graduates that are ready to enter the workplace with confidence or shine in graduate school. Visit the Web site at www.moravian.edu.