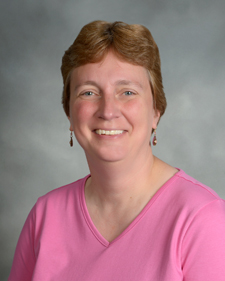 Bethlehem, Pa., April 28, 2015—Moravian College is pleased to announce that Carol Traupman-Carr, dean of curriculum and academic programs, is one of 28 administrators in higher education nationwide selected by the Council of Independent Colleges (CIC) to participate in a year-long Senior Leadership Academy.

Individuals chosen for the program are administrators in higher education who have been identified by their institutions as having the potential for senior leadership positions in independent colleges or universities. Traupman-Carr will participate in two seminars, one in Baltimore, Maryland, November 6–8, 2015, and one in Washington, DC, June 23–25, 2016. She also will undertake a mentoring program, work with experts, participate in webinars, and engage in a series of readings and case studies during the 2015–2016 academic year.

The Academy is designed to prepare prospective leaders to assume positions as the chief officers in any division—including academic affairs, student affairs, finance, enrollment management, and advancement—in independent higher education.

“The need to prepare future leaders of colleges and universities has never been greater because the generation of people now in senior leadership positions on campus is rapidly approaching retirement,” said CIC President Richard Ekman. “Competition for the available places in the program was intense, and the review committee found the nomination materials to be most impressive. They (and I) believe that Carol Traupman-Carr has the potential for highly effective leadership in a position of senior responsibility on campus.”

Traupman-Carr serves her local community by volunteering at St. Ann School, Emmaus, Pa, where she has served as president of their Parent Teacher Organization, chair of the school's annual walkathon, and is now is a member of their governing board. For 23 years, she has served as the choir director of St. Ann R. C. Church in Emmaus. She has been the staff arranged for the Mainstreet Brass Quintet. She had served as editor of two books. She has published numerous arrangements for brass ensemble and, in 2015, her first choral arrangement was published by CanticaNova.

“The Council of Council of Independent Colleges made a great choice in selecting Carol,” said Gordon Weil, vice president for academic affairs and dean of the faculty. “Carol has demonstrated solid leadership in her role as dean of curriculum and academic programs at the College—her potential within higher education is boundless."

Since the program began in the 2010–2011 academic year, 48 percent of participants who have completed the program have experienced upward mobility. “These indicators suggest that CIC is helping to meet the leadership needs of higher education by offering highly effective leadership development programs for modest fees to member institutions,” Ekman said.

The Academy is co-sponsored by CIC and the American Academic Leadership Institute (AALI). Tom Kepple, president of AALI and president emeritus of Juniata College (PA), is the program director.

For more information about the Senior Leadership Academy, visit www.cic.edu/SeniorLeadershipAcademy.

The Council of Independent Colleges is an association of 750 nonprofit independent colleges and universities and higher education affiliates and organizations that has worked since 1956 to support college and university leadership, advance institutional excellence, and enhance public understanding of private higher education’s contributions to society. CIC is the major national organization that focuses on providing services to leaders of independent colleges and universities as well as conferences, seminars, and other programs that help institutions improve educational quality, administrative and financial performance, and institutional visibility. CIC conducts the largest annual conference of college and university presidents. CIC also provides support to state fundraising associations that organize programs and generate contributions for private colleges and universities. The Council is headquartered at One Dupont Circle in Washington, DC.

The American Academic Leadership Institute provides leadership identification and development programs across all sectors of public and private higher education. AALI creates and implements programs and assistance for academic leaders in various administrative positions enabling them to be successful in their roles and to advance the institutions they serve. In addition, AALI supports research and publications and consults with academic leaders and boards of trustees concerning traditional and emerging issues facing higher education and its governance. Headquartered in Washington, DC, AALI and its predecessor organizations have participated in the advancement of higher education for over 30 years. A subsidiary of AALI, Academic Search Inc. (ASI), one of the nation’s premier search firms since 1976, provides significant funds each year to support AALI leadership development programs. The ASI subsidy allows AALI programs to be offered at a comparatively low price.