The Making of a Magazine

Communications & Media Studies Major Interns at Eat This, Not That!

Many of us read magazines as part of our daily media consumption, but few of us know first hand how a publication comes together. That’s what English major Kaytlyn Gordon ’19 set out to learn through her internship at Galvanized Brands.

The global health and wellness media empire—built by famed alumnus David Zinczenko ’91 and operating on campus in The Zinczenko Center for New Media—produces the quarterly magazine, Eat This, Not That!, where Gordon worked on content for the spring 2018 issue. 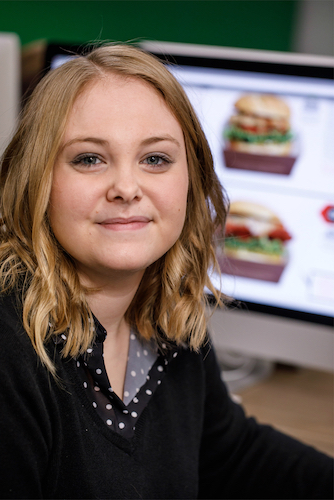 Gordon first crossed paths with the magazine’s executive editor, Jeff Csatari, through her position as editor-in-chief of The Comenian student newspaper when Csatari would attend the paper’s editorial meetings to offer his guidance. It wasn’t until Gordon spoke with Csatari at Moravian’s Spring Job & Internship Fair that she learned of his need for interns at the Galvanized office on campus.

“I wanted to do the internship because I have always been interested in pursuing a career in journalism and I knew this internship would offer the hands-on experience I craved,” she says. “I also knew that it would give me the opportunity to have my work published in the magazine, which would be very beneficial for my portfolio.”

Gordon is no stranger to the pressures of tight deadlines and resourcefulness as editor of The Comenian and The Manuscript student literary magazine, and as a Writing Center tutor, but she had much to learn about executing a magazine’s relationship between words and visuals.

“From going to meetings with Jeff, I learned that there’s a lot of thought that goes into laying out the magazine and gearing the content and graphics toward a specific audience. It’s no longer just about your ability to write, but also your ability to engage readers with photos,” Gordon says.

“I’m so thankful that my professors at Moravian continue to prepare me for my future career and give me the skills that I need to be successful.” — Kaytlyn Gordon '19

Building upon the skills she acquired through her extracurricular pursuits, Gordon also employed what she learned in the classroom to contribute to a professional editorial team. Crafting succinct emails in her professional writing class sharpened her communication skills, just as the research papers in her literature courses set Gordon up to extract the pertinent data from health studies.

“All of my professors have made it a precedent to emphasize how what I learn in class will one day translate to my future job,” she explains. “I’m so thankful that my professors at Moravian continue to prepare me for my future career and give me the skills that I need to be successful.”

With strict deadlines and lots of sleepless nights, Gordon says that magazine journalism isn’t as glamorous as it may seem to readers. While she discovered that she might not pursue a career in the magazine field, she did develop a newfound appreciation for the industry.

For now, she’s content taking time to further explore her interests through more internship experiences, she says. “I hope to be able to get a job that allows me to use my writing and marketing skills in a way that effectively contributes to the progress of a company."