Parkinson’s disease (PD) is a movement disorder and neurodegenerative disease that affects nearly 10 million people worldwide. Typical symptoms include rigid posture, shuffling gait, resting tremors, and slow movement. Parkinson’s disease occurs due to degeneration of dopaminergic neurons in the midbrain. Dopamine is a neurotransmitter that is necessary for smooth motor function. Therefore, the death of these neurons leads to the symptoms of Parkinson’s disease. Inflammation and oxidative stress is also characteristic of PD and other neurodegenerative diseases. However, research has shown that curcumin, a chemical found in turmeric, is effective at protecting and restoring dopaminergic neurons in an acute nigral lesion rat model of PD. Specifically, this research showed the beneficial effects of curcumin on the substantia nigra, an area within the midbrain known to degenerate in PD.

Our project aimed to evaluate the effectiveness of curcumin on the striatum, a target structure of the nigral dopamine neurons. This type of lesion creates a more progressive model of PD in the rodent. This summer, we induced PD in rats via delivery of the neurotoxin, 6-hydroxydopamine, via stereotaxic surgery. We administered either curcumin or its control vehicle in the rats for six weeks post lesion. Behavior testing was performed each week to evaluate motor function in control and experimental animals. 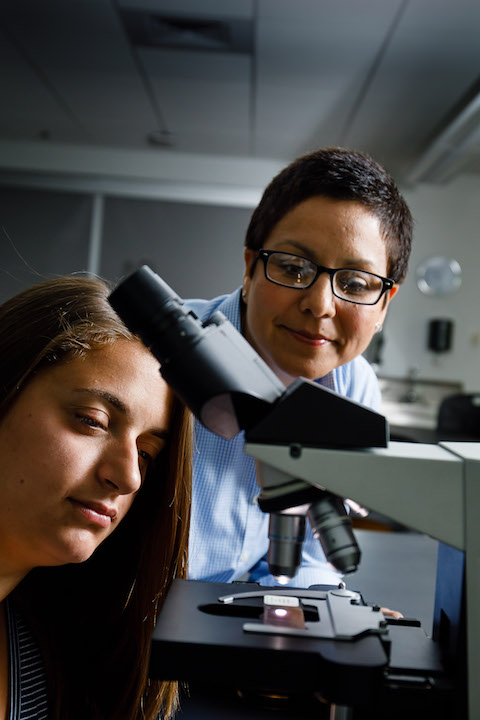 Dr. Fox has worked with the rat model of PD for her entire career. In the past, she has studied the effects of antioxidants, such as vitamin E and selenium, as protection agents against neurotoxicity. Most recently, she began investigating the anti-inflammatory and antioxidant properties of curcumin on PD as part of her research.

I had shadowed a former student in Dr. Fox’s lab and became interested in this work. I found this research very meaningful and wanted to continue investigating curcumin as a potential treatment for PD. Together, we chose to investigate the scope of protection offered by curcumin in a more progressive model of PD, since this had not yet been studied.

What’s the best part about working with your faculty mentor? What valuable insights has she brought to your project?

Dr. Fox has been a strong role model and mentor for me since I declared as a neuroscience major. She is passionate about teaching, both in the classroom and in her laboratory. She has developed a well-rounded neuroscience curriculum that incorporates supplemental components, such as research, community service, and advocacy for scientific funding. These areas of the program have enriched my undergraduate experience by challenging me outside of the classroom with real-life experiences. I was fortunate to work one-on-one with Dr. Fox this summer. Even though she and I have very different learning styles, she was patient and flexible as we worked to complete this project. She helped me realize that research does not always go as expected and that it is important to think critically when problems arise and be willing to adapt your methodology.

What was your biggest obstacle?

Learning the various techniques and procedures specific to Dr. Fox’s lab has been a challenge. There were many new skills I had to learn for this project. For example, during the first week of research, I learned to perform stereotaxic surgery on live rats to induce Parkinson’s disease. Injecting the animals and conducting the behavior testing was also difficult, since working with live animals makes things unpredictable. This was especially true when we began administering curcumin after surgery. I had to be diligent about observing for any abnormal behavior. Several times, we needed to adjust the dose or stop injections altogether on a few rats if they exhibited any adverse side effects.

My goal is to attend medical school after I graduate from Moravian. Through my experiences shadowing at St. Luke’s, I learned the importance of evidence-based medicine. However, I had not had any experience researching in a laboratory prior to this summer. While evidence-based practices take many years, I know that it has to start somewhere. It is amazing to think that our research could help lead to discovering treatment options for people with Parkinson’s disease. My biggest takeaway is that research is a critical component of medicine and it is essential for the advancement of evidence-based practice.

Analysis of behavior data did not show a statistically significant protective effect in the curcumin treated animals when compared to the control animals. However, there appear to be some trends for improved behavior in the curcumin group that will need to be further examined in future studies. Immunohistochemical staining, cell counting via stereology and data analysis will take place during this fall term to determine if curcumin’s antioxidant and anti-inflammatory effects can be observed at the cellular level. If this is the case, then additional studies will be needed to identify the best timing for administering curcumin in this progressive model of PD.

Overall, how do you feel about being awarded this opportunity? Why should other students take advantage of the SOAR program at Moravian College?

I felt honored to be selected for this competitive program. I really enjoyed working one-on-one with Dr. Fox. She is an expert in her field and has been researching Parkinson’s disease and neuroinflammation for her entire career. To be able to contribute to the advancement of research in this field is very rewarding. I feel other students should take advantage of the SOAR program because it allows you to explore an area of study that you wouldn’t normally investigate in your classes. For example, I learned a lot about various neurodegenerative diseases in my neuroscience classes. However, this project gave me the opportunity to dig deeper into this topic. SOAR also provides a great opportunity for interdisciplinary collaboration. I really enjoyed listening to my peers present their research each week. I learned about topics outside of my field of study. This is the goal of a liberal arts education, and SOAR helps to achieve this goal.

Do you plan to expand upon your research?

I plan to continue my research as an honors project. Over the summer, we conducted behavior testing to evaluate motor function in our rats. At the end of the 10-week program, we euthanized the animals to collect brain tissue for cellular analysis. For my honors project, we will be looking for cellular evidence that curcumin was effective at protecting dopaminergic neurons from inflammation and cell death.

Any plans to present this research outside the SOAR presentations?