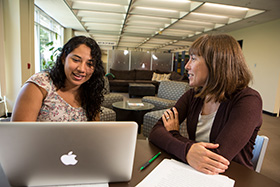 Project: Narratives of Place and Belonging to the Digital Age

Project details: One curiosity we wanted to explore was the different way in which intellectuals and Argentine indigenous community leaders articulate a vision of concepts such as community, citizenship, belonging within a nation, and national discourse that effectively marginalizes them or undermines their autonomy by privileging the desire of multinational companies. Following this thinking, another goal was to take a look at the burgeoning Latin American literary production that is online-based, including fotonovelas, blogs, twitter feeds, etc. and the role that these works play either complementing existing printed literature or being the primary form of writing for some public intellectuals whose works focus too, on the articulation of place and community.

Why I wanted to participate in SOAR: Previously, I had taken a few courses with Dr. Erica Yozell with a special emphasis on Latin American studies. These classes helped me to become sensitive to the issues that the region is facing. Despite being a Latina, my knowledge about the cultural, economic and political differences in Latin America was very narrow. This SOAR project offered me an excellent opportunity to not only learn more about this subject, but also to experience a condensed version of start-to-finish research project in Latin American cultural studies.

Results: The outcome of this project was a conference paper. The project also helped me to gain experience in locating, organizing and assessing sources, as well as strengthening my skills of critical synthesis, evaluating sources, and synthesizing vast quantities of information and narratives in two languages. This experience serves as excellent preparation for the Honors project on Spanish film that I will begin in the fall.

Future plans: My future plans are to attend graduate school and get a Ph.D. in Latin American Studies. I would love to study for a year or two in Argentina or Chile.