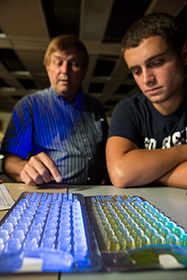 Project: Evaluating the Extent and Impact of Coliform Bacteria in the Little Lehigh Watershed

Project details: Over the last several years, the Little Lehigh Watershed has been plagued with high fecal coliform numbers. Working with the Wildlands Conservancy and the Pennsylvania Department of Environmental Protection, we are sampling the Little Lehigh Creek and several of its tributaries to see if there are consistent levels of high bacteria counts which would cause it to be considered “chronically impaired” for recreational use. Nineteen different sites will be sampled five times over two consecutive 30-day periods in June and July 2012 to see whether fecal coliform, E. coli, and enterococci levels are within guideline concentrations that deem them safe for recreational use. Several trends have been observed to date. Fecal coliform, E. coli and enterococci levels at all 19 sites exceeded safe guideline levels during the first 30-day sampling period. Sites that are the most upstream, all located in rural areas, have higher levels of bacteria than those sites that are downstream in urban areas. It was also observed that bacteria levels dramatically rose after the commencement of rainfall. With the second round of sampling beginning soon we will be able to verify which sites will be considered “impaired” and, thus considered potential health hazards.

Why I wanted to participate in SOAR: I wanted to get great work experience in an environmental science field.

Results: We have found that all 19 sites are impaired according to Pennsylvania Standard. The second 30-day period is not complete yet and we will find out the results in mid-August.

Future plans: My future plans are to continue my education through a master’s program in Environmental Science. One of the environmental science fields I would like to explore in my future endeavors is alternative energies.