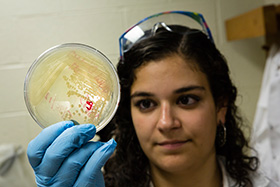 Project details: Antibiotic resistance is a growing problem due to the overuse and misuse of antibiotics. A possible way to combat antibiotic resistance is to find new, selectively toxic compounds that have previously unutilized targets. Possible new targets may be secretion systems of bacteria. Bacterial secretion systems are responsible for the translocation of proteins across cellular boundaries. Presently six secretion systems of bacteria have been identified and many are necessary for bacteria to be virulent. Inhibition of these secretion systems may serve as suitable targets for the development of novel broad-spectrum antimicrobial drugs. Previously, nine small molecule inhibitors of T3S in S. typhimurium were identified in a high throughput screen1. In this study, we began to characterize the various mechanisms of action of these small molecule inhibitors.

Why I wanted to participate in SOAR: I would like to go to graduate school for microbiology after graduation, so I approached Dr. Felise to see if she had any research I could assist with. The project that she proposed was exactly what I was looking for, due to my strong genetics background.

Results: We found three compounds that inhibit gene expression of both the type III secretion system encoded on Salmonella Pathogenicity Island 1 and the flagellar regulon in Salmonella enterica serovar Typhimurium. Two compounds, which are structurally similar, seem to inhibit gene expression by a different mechanism than the third structurally different compound. Five compounds appear to function by inhibiting the physical process of secretion rather than gene expression, while one compound inhibits bacterial growth similar to classical antibiotics. Our data supports the notion that it is possible to develop a different class of drugs which target secretion systems thereby inhibiting pathogenesis without inhibiting growth.

Future plans: I plan to go to graduate school for microbial genetics to get my Ph.D. and continue to do academic research.