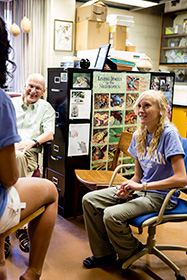 Project details: The coevolution of ant and plant species dates all the way back to the mid-Cretaceous period, when the emergence of angiosperms soon followed that of ants and other social insects. Evidence shows that, since that time, ant-plant relationships have cooperatively evolved together, producing numerous reciprocal adaptations and specific traits that allow for the maintenance of mutualistic interactions. Studies have projected the observation that ants have become constitutive mechanisms of anti-herbivore defense in many tree species. Relationships such as this, as well as the concept of mutualism, can be clearly modeled in the Neotropical ant-plant association between Cecropia trees and Azteca ants. Cecropia plant species exist either as myrmecophyes or as non-myrmecophytes, categorized according to whether the plant utilizes biotic or chemical defense mechanisms. In total, approximately 80 percent of Cecropia species cooperate with ant inhabitants for anti-herbivore defense; therefore projecting biotic defense systems. The other 20 percent rely on chemical and physical defenses. Why is it that these 20 percent fail to support a mutualistic relationship projected so frequently in other populations of this species? If they are not using ants for defense, what specifically is the anti-herbivore defense they utilize?

My research project was conducted in Ecuador in South America, where I studied anti-herbivore defenses in the tropical tree Cecropia sciadophylla. In the tropical forests of South America, leaf-cutter ants are important herbivores. These ants not only harvest pieces of leaves from tropical trees in the canopies, but also transport them along foraging trails to their underground nests. In these nests, the leaf-cutter ants use the leaves to grow a fungus. The ants use this fungus as a source of food. Throughout my project, I studied potential defenses against these ants in the tree Cecropia sciadophylla using a pick-up assay.

I harvested leaves of different ages from the tree and presented them to the ants along the foraging trails to see if they would be acceptable. The rate at which the leaf pieces are picked up and carried away by the ants in my pick-up assay will be my indicator of acceptability. I want to compare leaf pieces from young, immature leaves, with mature leaves of C. sciadophylla. Very young leaves of tropical forests are generally more vulnerable to herbivore attack than older mature ones. Because of this, they have higher levels of chemical defenses. If C. sciadophylla can defend itself chemically against leaf-cutters, I predict that leaf fragments from young leaves will be less acceptable to the leaf-cutter than older more mature leaves. Young leaves should have higher pick-up rates than mature leaves.

Why I wanted to participate in SOAR: It is often said that experience and travel are education in and of themselves, and I have always felt that traveling and studying in new environments advances an individual’s experience. There is only so much that can be discovered from a book, true discovery and valuable knowledge lies within the world’s communities and environments. I was eager to participate in this program to expand my experience and knowledge.

As an environmental science major and biology minor, it is important to gain worldly insight and outdoor experience. Four years ago, I conducted a series of field studies centered in marine biology at St. John in the U.S. Virgin Islands. This trip made me realize I wanted to work in conservation biology. Working hands-on in a different environment allowed me to learn so much about the biodiversity and ecological functioning of the surroundings, as well as shape my understanding and appreciation for various global cultures. I learned so many valuable skills that I continually utilize in my studies today that I might not otherwise have gained from a book. Completing botanical studies in Ecuador has added to my knowledge in biology and environmental science by opening the same pathways for me as that trip did, and by allowing me to work hands-on with various plant species that are non-native to North American environments.

Results: Currently, our results are still being obtained. In Ecuador, our trials acquired interesting results. Tissue disks from leaves of the non-myrmecophyte Cecropia sciadophylla at each stage of leaf development as well as disks from the stipule tissue were rejected by leaf-cutter ants. However, the ants also avoided the solvent control oat flakes. This could have been caused by the solvent not entirely evaporating before we used the disks. Additionally, the HCl in the extraction solvent was included to maximize extraction of anthocyanin pigments (known to have anti-fungal properties), but it may also have deterred the ants from picking up the oat flakes.

From our data it is not possible to determine if this rejection is caused by chemical defense and/or physical properties of the leaves because the ants did not harvest solvent-treated oat fakes.

Future plans: After I graduate from college, I intend on conducting numerous studies centered in conservation biology and animal behavior, both here in America and abroad. I want to visit different countries around the world and work with endangered species that inhabit those areas and study their behavioral patterns, as well as study biodiversity loss and its effects on flora and fauna populations. I am excited to be returning to Africa in December, where I will conduct game counts and population surveys (studies centered in conservation biology dealing with species diversity) in the bush of Botswana.