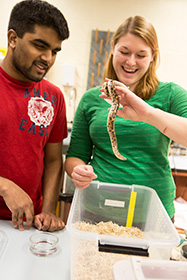 Project details: We videotaped erycine snakes, also called sand boas, while they fed on live mice to analyze the angle of movements in their snout and upper jaw. We looked at snout elevation in strikes and swallowing; and maxillary depression and snout twisting in swallowing. These are burrowing snakes and we wanted to see how their snout balances both functions (burrowing and feeding), and then compare their movements to other snakes.

Why I wanted to participate in SOAR: Research is a large part of the field of science. Being a science major, I wanted to see what working in research would be like. Since I will be graduating in the near future, I wanted to be able to weigh all my options.

Results: There may be differences in snout movement between species of erycine snakes, as well as between strikes and swallowing within a species. Erycines may also be more limited in lateral snout movements while feeding, such as twisting, than elevation and depression. This is from reading literature on Nerodia, a water snake, and Elapids, front fanged venomous snakes.

Future plans: I will apply to medical schools in the spring/summer.