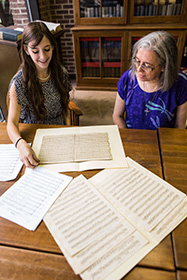 Project details: Deeply rooted in musical tradition, the Moravian Church has music which dates back to the founding of Bethlehem (Pa.) in 1741 – some even earlier. Over 1,000,000 pages of this music still exist today and are housed at the Moravian Archives in Bethlehem and at the church’s Southern Province Archives in Winston-Salem, N.C. Spanning a period of more than 250 years, this body of work not only possesses historical significance, but also represents a plethora of genres including vocal, chamber, and orchestral works.

I believe that preserving and promoting the knowledge and performance of this historical music is essential because it is not only part of a musical custom, but also portrays our Moravian tradition. In order to promote the advancement of such works, I spent ten weeks at the Moravian Archives doing archival work under the auspices of the Moravian Music Foundation. While I was there, I took a German Script course to aid in the translating process. The knowledge gained from this course added immense value to many of the pieces I transcribed while at the Moravian Archives. Thousands of manuscripts still remain untouched. My goal is to bring a handful of these works into the hands and public eye of the Moravian community as well as the musical world outside Moravian culture.

Why I wanted to participate in SOAR: The Moravian Archives is a wonderful resource that luckily, is only a few blocks from the college campus. This being said, I was thrilled when I discovered that thousands of untouched music manuscripts were waiting to be edited and transcribed. There is something compelling about these pieces that were written hundreds of years ago. I was attracted to this era in history and felt obligated to reveal the secrets which lay dormant in the vaults of the archives for hundreds of years.

In addition, I am currently looking into graduate school opportunities in Germany. My duties at the Moravian Archives, working with the Moravian Music Foundation, have inspired me to explore possible careers such as musicologist or archivist. I never knew that working with history would entail so much. This opportunity was more than just editing scores and manuscripts; it was as if I were accessing a portal to another world, reliving a part of history which still thrives through manuscripts, songs, and diaries.

Results: At the conclusion of this project, I completed and revised three different scores. The first, “Herr, deine rechte Hand thut grosse Wunder” (Lord, Your Almighty Hand Does Great Wonder), was an orchestral and choral work written by Johann Friedrich Peter (1746-1813). The dedication on this work, written in Peter’s own hand, reads May 22, 1793. Peter is a famous name on campus—many may recognize it from Peter Hall, the old chapel that was named after Johann Friedrich Peter by his great-granddaughter.

My second work was another orchestral and choral composition entitled “Also spricht der Höhe” (For Thus Saith the High) by Johannes Herbst (1735-1812). This piece was written to commemorate the Single Sisters’ celebration on May 4, 1798. During my research, I found an accompanying flute part that was most likely composed in another Moravian community at Winston-Salem, N.C.

“Parthia” was the last score I edited. This is an instrumental work written in the late 1700’s by Joseph Morris. (A “Parthia” is one of the earliest pieces written for wind ensemble.) Morris’s piece was written for two clarinets, two horns in B, and two bassoons. I took particular interest in this piece, as it was written for clarinet, my primary instrument. In fact, I am currently in the process of arranging this four-movement work for the clarinet choir at Moravian College. The piece will be for four B-flat clarinets and two B-flat bass clarinets and will be premiered at our concert in the fall semester of this year.

Future plans: Currently, I am applying for a few scholarship opportunities, one of which is the Fulbright Teaching Assistantship Program. The other program I am applying for is through Deutscher Akademiker Austausch Dienst (DAAD); DAAD offers a music study scholarship. As I mentioned previously, I really want to go back to Germany and possibly pursue a job in musicology.