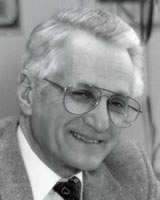 Born in Czechoslovakia, Ivan Backer came to the United States via England in 1944, where he eventually became a driving force for revitalization in Hartford, Connecticut’s blighted Frog Hollow. Ivan received his B.A. from Moravian College and earned degrees from Union Theological Seminary and General Theological Seminary, both in New York. He was employed in the business sector and in parish ministry until 1969, when he became Trinity College’s first Director of Community Affairs. In 1975 he became the Director of Graduate and Special Programs where he helped develop a masters program in Public Policy Studies and created numerous community–bridging activities. He helped to form a neighborhood issues committee with Hartford Hospital, Trinity College, and the Institute of Living; and he became the founding Executive Director and President of SINA, Southside Institutions Neighborhood Alliance. SINA grew to also include Connecticut Children’s Medical Center, and Connecticut Public Television and Radio, also in Hartford. During Ivan’s seventeen years as President/Executive Director, SINA evolved into a highly effective force for positive change in Hartford and became nationally recognized as a model for community revitalization. His community involvement reached beyond his professional responsibilities, resulting in his service on at least 17 boards of directors, task forces, and coalitions. He set a standard for city-college relations and helped to make Hartford a prototype for revitalization by bringing together its poor and disadvantaged, its cultural elite, and its political poles.