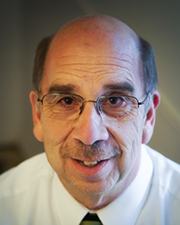 The Benigna Education Award recognizes an alumna or alumnus for outstanding contribution to the field of education. In recognition of  his leadership in providing support for GLBT students, faculty, and staff, the Moravian College Alumni Association is proud to present Douglas E. Bauder ’71 with the 2014 Benigna Education Award.

Doug Bauder ’71 is an inspiration and support to all who encounter him by serving as a friend, mentor, role model, and more importantly, educator. Having pioneered the Gay, Lesbian, Bisexual, and Transgender Student Support Services Office at Indiana University Bloomington (IU), Doug’s role as Office Coordinator has built bridges with countless students, organizations, and the community. Through informative presentations and workshops, he has spent the past twenty years educating others on the diversity of life in order to create understanding and acceptance. Bauder’s warm passion and humble dedication to this field has helped him to save the lives of numerous students struggling with the loss of support from friends and family, harassment from peers, and homophobia.

Additionally, Doug serves on many committees in support of diversity and multiculturalism. He was appointed by the Mayor of Bloomington to the Bloomington Human Rights Commission and Bloomington United. He serves as Chair of the Commission on Multicultural Understanding in order to make the University’s campus more welcoming and inclusive for all. Doug is also a published author with a chapter in the book “Working with Lesbian, Gay, Bisexual, and Transgender College Students: A Handbook for Faculty and Administrators” published in 1998. Bauder has received copious accolades including the Outstanding Program Award from the Midwest BLGBTA College Conference, the Robert Shaffer Outstanding Staff Award, and the prestigious Trevor Brown Award from the School of Journalism, IU.

Bauder received his Bachelors of Arts in Sociology at Moravian College in 1971, followed by his Master of Divinity from Princeton Theological Seminary in 1975. Prior to his position at IU, he served as Pastor for various Moravian churches throughout Wisconsin and Pa. Doug is also the father of two children and grandfather to five.