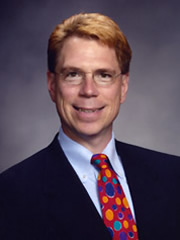 In Recognition of his service to Moravian College, the Alumni Association is pleased to honor William F. Bauman ’74 with its 2003 Medallion of Merit following the Reunion Luncheon on May 31, 2003.

While a student at Moravian, Bill’s active involvement in the Moravian College Theatre Company included founding Iota Theta, the Moravian Chapter of the National Theater Honorary Society. As a 1974 graduate of Moravian College, Bill received Moravian’s Patricia Erskine Memorial Award for Excellence in Theatre Company Leadership. Since then he has been Moravian’s most supportive alumnus for its theater program. For more than 20 years, Bill’s involvement in over 100 productions at Moravian included volunteer roles as actor, director, stage and property manager, production coordinator, lighting and sound technician, costumer, set design and construction, and publicist. Bill earned a Master of Fine Arts in Theater from Ohio University. His administrative career included serving as assistant coordinator of student services at St. Luke’s School of Nursing, where he played an integral role in the development the St. Luke’s School of Nursing at Moravian College.

Bill’s alumni support has extended beyond the Theater and Nursing departments. He served on the Art Auction committee, was a patron for both and Art Auction and Antiques Show, participated as a Freshman Orientation dinner host, served as co-chair for his 25th reunion, was a member of the Commission on the Future, and has faithfully attended numerous alumni programs. In 2001 the Alumni Association recognized Bill with its Unsung Hero Award.