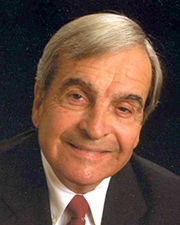 Joseph P. Castellano is first generation and first in his family to attend college. He made the most of his Moravian College experience, becoming active on campus, both before and after graduation.

A pre-law major at Moravian, Joe was a member and officer of Omicron Gamma Omega (OGO) fraternity, chairman of the Disciplinary Committee, class treasurer, member of the Triangle Honor Society, and much more. He later attended Seton Hall Law School and took advanced courses at the University of Michigan. Castellano served honorably in the U. S. Army with the rank of staff sergeant. Following his military experience, Castellano had a successful career as a human resources executive for major pharmaceutical companies.

Joe reconnected with Moravian by serving on his class reunion committee and leading the re-colonization of OGO. He spent countless hours meeting with students and committee members and attending various campus events. In 2006, Castellano joined the Alumni Board and eventually was named president. His leadership proved invaluable during some challenging times, and he was instrumental in working with the Alumni Relations staff in establishing a recruitment process to attract qualified, committed Greyhounds to the Alumni Board. He was also at the forefront of the Lifelong Learning programs.

He also served as a member of the Board of Trustees, where he was involved with the College’s strategic planning. Simultaneously, he worked tirelessly as an alumni volunteer for Homecoming, Alumni Weekend, and many other Alumni Association programs, setting the example for others to volunteer. He recently represented his class in the procession for the inauguration of President Bryon L. Grigsby ’90. Joe has been an asset to Moravian and possesses the best qualities of a Moravian alumnus. He resides in Budd Lake, NJ with his wife Jo Ann. They have two children and six grandchildren.