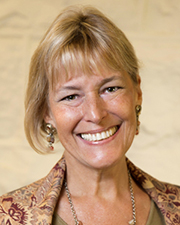 Called a Renaissance woman by many, Kathy Ozzard Chism ’77 is a unique mix of copious right and left brain skills and accomplishments, world visions of love, health, and peace - and all bound together by a heart of gold.

Initially, Chism, an English and Elementary Education major at Moravian College, taught fourth grade, but she longed to see – and help – the world. In the years that followed, she held positions as a licensed interior architect/designer, professional meeting planner, sales manager, nationally certified massage instructor/therapist, actress, voiceover artist, and published author. She even spent 10 years as a flight attendant for United Airlines and earned a private pilot’s license in 1985. Today, Chism serves as a holistic wellness educator, and is working on her third book.

For the past decade Chism also devoted herself to Dream One World, Inc. (DOW), the all-volunteer nonprofit organization she founded in January, 2005. Through DOW, Chism and a small team of colleagues have been changing lives worldwide, including those of 150 Ugandan orphaned schoolchildren and children of the imprisoned. They built not only a school, but an educational campus just outside of Uganda’s capital city. DOW is providing education, clean water, healthy food, electricity, and hope to a forgotten area.

Using a “pay-it-forward” theme, Chism’s nonprofit has also served natural disaster victims, ill or disabled children and adults, city rejuvenation efforts, and animal rescues. While much of its efforts have been in the U.S., DOW’s support has also been felt abroad in the Bahamas, Peru, Thailand, Japan, the Philippines, and now, Uganda.