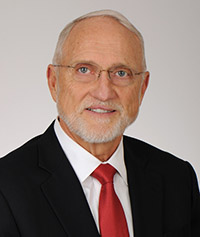 The Comenius Alumni Award recognizes an alumna or alumnus for outstanding achievement in her or his field of work.

Dr. Clarke is a surgeon specializing in genitourinary oncology and reconstructive surgery. He has operated and taught internationally, from Russia to Singapore to Taiwan. As professor of urology at the Medical University of South Carolina (MUSC), Dr. Clarke teaches medical students, residents, and postgraduate fellows robotics and minimally invasive oncologic surgery. He recently returned from Vietnam, where he represented the American Urological Association and spent his days lecturing and operating.

After earning his bachelor of science degree in biology from Moravian College in 1972, Dr. Clarke went on to obtain his MD and PhD in medical sciences/radiology from the University of Toledo, where he was inducted into the Alpha Omega Alpha Medical Honor Society. He remained at the University of Toledo, where he completed his residency in urology and a fellowship in nephrology and hypertension. He then joined the faculty at Emory University in Atlanta as assistant professor of surgery, where he ran the Urology Residency Program. During his tenure at Emory, Dr. Clarke acted as principal investigator on the multicenter NIH Medical Therapy of Prostatic Symptoms (MTOPS) trial, the results of which were published in the New England Journal of Medicine. During this time he was also chief of urology at the Grady Health System in Atlanta. He was later promoted to associate professor of surgery and held the chief of urology position at the Atlanta Veterans Hospital. During his tenure at Emory, Dr. Clarke earned Teacher of the Year in Urology honors as well as the Atlanta Top Doctor title.

Dr. Clarke started at MUSC in 2002 as professor of urology and associate dean for Graduate Medical Education with responsibility for 1,200 residents and fellows. He also served as secretary, vice president, and president of the medical staff at MUSC from 2007 to 2013.

Dr. Clarke’s research interests include minimally invasive and innovative prostate cancer treatments, including cryosurgery, robotic surgery, and brachytherapy. He has been named one of the Best Doctors in America from 2005 to the present and Teacher of the Year in Urology at MUSC. He has also served on numerous national urologic and educational committees, including as president of the Cryosurgery Society.

During his career, Dr. Clarke has contributed to numerous journal articles, book chapters, and national and international conferences. He is passionate about training new physicians, and he considers it an honor and privilege to care for patients and support their families. Dr. Clarke’s wife, Jennifer Swain Clarke ’73, also earned her bachelor of arts degree at Moravian College.