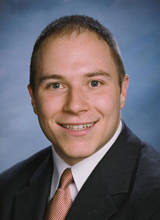 Brian graduated magna cum laude from Moravian in 2002 with a double major in political science and economics and with honors in economics. While a student at Moravian, Brian’s extensive volunteer leadership was most apparent in his work with Moravian’s Greek community. Sigma Phi Epsilon National Fraternity recognized him with its most prestigious national award for his leadership, both as president of Sigma Phi Epsilon and of the Intrafraternity Council. His far-reaching leadership touched many other areas of student life, and included service on Moravian’s Board of Trustees, the varsity baseball team, Student Government, the Amhrein Investment Club and numerous other organizations. In addition, Brian was a student advisor and he participated in a study abroad program in Europe for two summers. Following graduation Brian has pursued a successful career in the pharmaceutical field.  In his current role as the director for the strategy consulting practice of PharmaStrat, Inc., he works with many of the world’s leading pharmaceutical and biotech companies. At the same time he enthusiastically promotes the firm’s scholarship and internship programs with Moravian. Active as an alumni volunteer since graduating, Brian has participated in various leadership and career development roles with students, including helping to create the “Sophomore Success” program and serving as President of Moravian’s chapter of the Sigma Phi Epsilon Alumni Board.  As a member of the Young Alumni Board, Brian assisted in the creation and implementation of an important young alumni survey; and as the board’s new president, he is now working to use the survey’s data to create a new outreach model for Moravian’s young alumni.   Recently appointed to the Alumni Association’s Board of Directors, Brian is already using his strategic skills to help develop innovative programming for the Alumni Association.   Brian lives in Yardley with his fiancée, Jaime Marks ’04, another outstanding alumni leader.