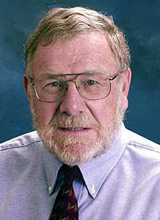 The Comenius Award is given in recognition of outstanding achievement in an alumna’s or alumnus’ field of work. In recognition of his distinguished career as a leader of environmental studies in higher education, the Alumni Association is proud to present Bruce C. Coull with the 2006 Comenius Award.

During the course of his career, Dr. Bruce Coull assumed a leadership role in developing a comprehensive approach to environmental studies in higher education on the regional, state, and national level. Dr. Coull received his B.S. from Moravian College in 1964, earned his Ph.D. at Lehigh University in 1968 and completed a postdoctoral fellowship at Duke University’s marine laboratory in Beaufort, NC in 1970. He was assistant professor at Clark University before joining the faculty at the University of South Carolina in 1973, where he later became a Carolina Distinguished Professor and served as Dean of the School of the Environment from 1996-2006.  Dr. Coull was a senior Fulbright Research Fellow at Victoria University of Wellington, New Zealand in 1981 and a visiting professor in Marine Sciences at the University of Queensland, Brisbane, Australia in 1994.  Author of 130 scientific papers on marine ecology and sustainability in higher education and editor of four books, much of his research has focused on copepods, microscopic crustaceans that are the base of the food chain for most coastal systems and other parts of the ocean. Dr. Coull led USC to approach environmental issues through multidisciplinary research, education and community outreach. He headed the South Carolina Sustainable Universities Initiative, a multi-university project that educates about frugal use of earth’s limited resources. He also led USC’s environmental efforts in the Ukraine related to the 1986 Chernobyl nuclear accident. Currently the president of the Council of Environmental Deans and Directors, Dr. Coull has served on multiple national review teams, has consulted for the European Community on marine pollution, and has chaired several national and international professional societies. In his professor emeritus status, he directs a USC research project sponsored by the Chicago and New York based Center for Humans and Nature to effect sensible use of resources in the South Carolina coastal region. Dr. Coull and his wife, Judith, have two children and one grandchild.