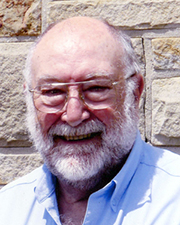 The Comenius Alumni Award recognizes an alumna or alumnus for outstanding achievement in her or his field of work. The Moravian College Alumni Association is pleased to present Ron dePaolo ’64 with the 2014 Comenius Alumni Award in recognition of his exceptional career as writer and editor.

Ron dePaolo earned a B.A. in history with honors in 1964 and an  M.S. with honors from the Medill School of Journalism, Northwestern University, in 1965.

While a Moravian student, he worked full-time at the BethlehemGlobe-Times as the night reporter and found time to serve as president of Moravian’s student government, chair of the CUB Disciplinary and planning committees, and member of OGO fraternity and Triangle Honors Society. After graduating from Northwestern, he joined LIFE Magazine where he was a staff correspondent before serving on the Far Eastern Regional Bureau in Hong Kong for three years. There he covered stories from the Vietnam War to the HUK Insurgency in the Philippines as well as events in Pakistan, Hokkaido, Tibet, and New Zealand. He was later promoted to bureau chief of the Western Regional Bureau in Los Angeles covering stories in every state west of the Rockies, north to Alaska, and south to Chile.

Following his time at LIFE, dePaolo worked for Business Week where he shared the Overseas Press Club Award as an international news editor. He later became the founding editor and publisher for I-AM magazine, which became Attenzione; was the Senior News Editor for Boardroom Reports; took on the position of editor in chief at MD magazine; and spent four years as editor and publisher for the famed book reviewer Kirkus Reviews.

Ron has co-written or edited ten books for Congressional Quarterly, edited several books for Random House, and published articles in Audubon, Smithsonian, Institutional Investor, Across the Board, the Philadelphia Inquirer, Readers Digest, Promenade, and Outdoors, among others. He has kept his Moravian ties strong by serving on the Alumni Board and as class reunion chair, hosting alumni receptions, and keeping contact with professors and classmates, especially fishing buddy Andy Semmel ’64. Now a resident of Maine, Ron has three children and three grandchildren.