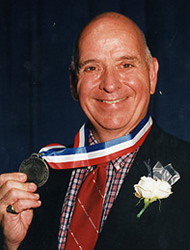 In recognition of his service to Moravian College, the Alumni Association is pleased to honor Reverend J. Michael Dowd with its 2002 Medallion of Merit.

A graduate of both the college and the seminary, Dowd could be heard over Steel Field for 30 years as the official announcer at home football games. Dowd has served on the Alumni Weekend Planning Committee, generating ideas to bring alumni back to campus, and helping to organize the Moravian College Alumni Choir to the delight of many reunion classes who enjoyed their music during the gala celebration dinner.

Dowd has served as a class agent for Moravian's development office from 1995 to 1997, a task force member of the Commission on the Future, and the General Alumni Campaign Chair.

He has hosted freshmen for the Alumni Association's Take a Freshmen to Dinner Program and acted as table hosts at the Freshmen Orientation Dinner. Dowd was a member of the Business and Industry Committee for 3 years, a participant in the Employers Forum in 1998, and an Antiques Show sponsor for several years. His other Moravian volunteer activities have included acting as a mentor for student interns, serving as a Homecoming volunteer, and participating in the Business Etiquette Dinner. The Alumni Association recognized him with its Unsung Hero Award in 1999.

"The dedication and energy Mike devotes to the Moravian community is even more impressive when considering his extensive involvement in the Easton community and the Lehigh Valley at large," said Bertie Knisely, director of alumni relations at Moravian. "Aside from his current occupation as Chief Operating Officer of the Children's Home in Easton, he is President of Northampton County Council, Secretary/Treasurer of the Easton Economic Development Corporation, and Dale Carnegie trainer for the Leadership Institute of the Lehigh Valley," she said.

Dowd received the Jack Cook Excellence in Economic Development Award in 2000, recognizing his significant contributions to the economic vitality of the city of Easton. He was recognized for his role in setting up the Two Rivers Council of Government, an intergovernmental organization founded in 1991 to address wastewater treatment. He was also a leader in the Lehigh-Northampton County transportation projects including the local construction of Interstate 78 and the routes 33 and 22 connection project.