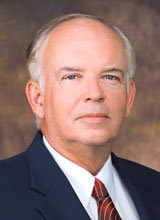 The Comenius Award is given in recognition of outstanding achievement in an alumna’s or alumnus’ field of work. The Alumni Association is proud to present Peter L. French ’60 with the 2005 Comenius Award for his distinguished career in Higher Education and International Relations.

Dr. Peter L. French has unselfishly spent over 44 years in the academic field, using various faculty and administrative positions to help thousands of students from across the globe achieve their dreams. After graduating from Moravian with honors in history Dr. French earned an M.A. and Ph.D. in International Relations from Yale University . His career in higher education has included teaching positions at Syracuse University, St. Lawrence University, and Mercy College, where he also served as provost. Before retirement he spent 5 years as president of Newberry College in Newberry , South Carolina , where he increased enrollment by 35%. Since retiring in 1999 he has held a number of interim positions. H is current "retirement" position is Associate VP and Dean for Academic Affairs at the University of South Florida in Sarasota , where he lives with his wife, Grace. During his 5 years at USF Sarasota/Manatee campus he has increased the size of resident faculty by over 300 % and more than doubled the number of academic programs. Paralleling Dr. French's career in higher education has been extensive interest in international relations with a particular focus on Africa . His work in Africa included sixteen field trips to east Africa over 20 years. Some of the highlights of his field trips were development of a Nairobi Semester program at St. Lawrence University which now has over 1400 alumni and appointment by President Moi of Kenya to serve on a planning commission to design the country's second university. Dr. French has held leadership positions on numerous boards and has been recognized with fellowships and awards, including the Galileo Medal presented by the University of Pisa, Italy. He has consulted for many institutions and agencies, including the US Peace Corps, the United Negro College Fund, World Bank, UNICEF, and the US Department of Education. For 45 years Dr. French has been an active, loyal alumnus, serving on the Board of Trustees, hosting events, and chairing his reunion and reunion fund. We are now honored to recognize him with the Comenius Award.