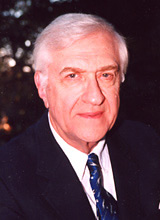 The Moravian College Alumni Association is proud to present Roy B. Goshorn '58 with its 2002 Comenius Award in recognition of his distinguished career in the world of television as a news producer, editor, writer, and weather broadcaster. The Associated Press, United Press International, Columbia University, the Pittsburgh Press Club, and the National Journalistic Fraternity have all honored him for his excellence in investigative journalism and news coverage.

While earning his B. A. in English from Moravian and his M. A. in journalism from Lehigh University, Roy worked at local newspapers in Allentown and Bethlehem. Early in his career he worked in various radio and TV stations in Pennsylvania, West Virginia, and in Baltimore, Maryland. Beginning in 1971 he began a twenty-year career at the ABC-TV News Bureau where his many positions included assignment editor, writer, and producer for the ABC Evening News and Nightline. Roy has worked with many familiar faces such as Peter Jennings, Sam Donaldson, Barbara Walters and Dianne Sawyer. During the last presidential election, ABC called Roy out of retirement to help follow the national elections in Florida and the third presidential debate in St. Louis. Roy's extensive travel assignments included leading a camera team for an interview with Eldridge Clever in Algeria and heading up the press pool for President Nixon's historic trip to China. His team was the first to use state-of-the-art portable satellite coverage from China. After retirement Roy eventually moved back to his hometown of Altoona, Pennsylvania, where he has worked at the local TV and radio stations and served as the Accu-Weatherman, broadcasting to more than one hundred radio and television stations. Roy's love of flying led him to obtain a commercial and an instrument pilot license, which he has enjoyed using for pleasure. During his spare time he also enjoys communicating with people around the world with his short-wave radio and operating a commercial photography business called "Images by Roy."