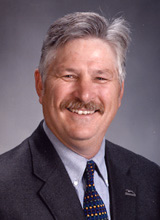 As a dedicated alumnus of Moravian College, Bob Gratz has mentored countless Moravian students, helping them not only to succeed in their careers, but to believe in themselves as educators.  He has met with many of them individually, advising prospective teachers about certification, tutoring future educators in effective teaching methods, and preparing applicants for job interviews.  In addition, he has presented to them during programs and has taught them in the classroom, exhorting “future hounds” to look beyond the test scores to find the essence of what will enable each student to learn. Moravian’s students have learned by Bob’s example, knowing that he has applied his astute mind, his enthusiasm and his integrity not only to his professional career but to all aspects of his life. Bob received his BA from Moravian in 1975 and earned his masters from Lehigh in 1984. He completed work in DeSales University’s Systems Approach to Quality Improvement predoctoral program in 1995. Currently Superintendent of Hackettstown Public Schools, Bob previously held positions as teacher, coach, principal and superintendent in three other New Jersey school systems. As coach of the championship team of the New Jersey Mock Trial Competition, he used the same skills that have made him successful as a teacher, athletic coach, and administrator. A presenter at the regional, state and national level, Bob is a member of numerous professional associations and has served on a variety of state and local task forces and committees. A member of three athletic halls of fame and a winner of Moravian’s Gillespie Award, Bob Gratz continues to exert a positive influence on the field of education, imbuing students, athletes and educators with his contagious, winning attitude. A member of a legacy family, Bob resides in Bethlehem with his wife, Nancy, and his three daughters.