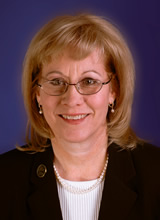 Candy Barr Heimbach ’79 graduated magna cum laude with a B.A. in psychology and elementary education from Moravian College.  After teaching for a few years, she returned to the Dickinson School of Law where she completed her Juris Doctor degree and developed an avid interest in malpractice defense litigation within the medical and health care industry. Candy eventually joined the Bethlehem office of Marshall, Dennehey, Warner, Coleman & Goggin. As a shareholder, she served as a senior vice president and a member of the firm’s board of directors. She is recognized as a “Pennsylvania Super Lawyer,” and has been admitted to practice before the Pennsylvania Supreme Court, the United States District Court for the Eastern District of Pennsylvania, and the United States Supreme Court. As an alumna of Moravian College, Candy serves untold hours in support of campus organizations and events. She is a past president of the Alumni Board and former member of the Board of Trustees, a member of Blue & Grey Club, Lehigh Valley Home Club, and a mentor to students. Candy resides in Bethlehem with her husband, Mark, and their dog, Gemmy. Her sons, Jon and Nick, graduated from Colby College and Moravian College respectively this May.