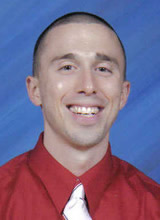 Scott A. Heydt ’02 of Chalfont, Pa., is presented as an Emerging Leader Award recipient. He earned his B.A. in psychology and teacher certification from Moravian and has continued his education at Duquesne University in the area of leadership and liberal studies. He teaches fifth grade at Groveland Elementary School in Doylestown, Pa., where he has received the Promising Practices award from the Character Education Partnership for his implementation of the “6 Pillars of Leadership” program as well as the Central Bucks School District Apple Award for his implementation of the “Green Team” environmental club. He is a member of the Alumni Board and is the International Director of Academic Affairs for Delta Tau Delta Fraternity’s Board of Directors. In late September, Scott will also celebrate the release of his first young adult novel entitled O.Y.L.