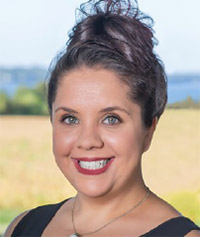 The Young Alumni Achievement Award is presented to an alumna or alumnus who has achieved exceptional success in her or his profession and who has graduated within the past 2 to 10 years. In recognition of her work in the field of linguistics, the Alumni Association is honored to recognize Virginia Hinders with the 2017 Young Alumni Achievement Award.

Even before she graduated from Moravian College, Virginia Hinders was laying the groundwork for a dream career that would encompass her personal and academic passions for politics, history, and the Spanish language. As a political science and history major with a minor in Spanish, Hinders pursued a long list of complementary activities on and off campus that ultimately led her to a distinguished career in government linguistics in Washington, D.C.

Aside from earning membership to the honors societies for foreign language, history, and political science, Hinders devoted countless hours to a variety of student organizations: Model NATO, LeaderShape, Amnesty International, Habitat for Humanity, The Learning Connection, student government, residence life, and Zeta Tau Alpha. Hinders also participated in AmeriCorps Scholars in Service to Pennsylvania, volunteering an astounding 450-plus hours in one calendar year. And she took advantage of the opportunity to study abroad with an intensive Spanish-language summer program at Veritas University in San Jose, Costa Rica.

Outside of Moravian, Hinders served as a government liaison/project ambassador for One World Youth Project, an organization that facilitates community action for the United Nations Millennium Development Goals.

Upon graduation, Hinders moved to northern Virginia and began working for Lionbridge Technologies in Washington, D.C., as a recruiter specializing in Latin American indigenous languages. Over the past decade, she’s been promoted to a variety of recruitment and management roles. She presently serves as a product manager (Interpretations & GeoFluent Integrations and Connectors) and is a sought-after presenter at linguistics conferences nationwide.