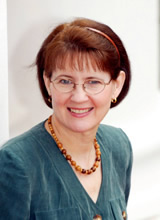 The Comenius Award is given in recognition of outstanding achievement in an alumna’s or alumnus’ field of work. The Alumni Association is proud to present Janine Jagger ’72 with the 2004 Comenius Award for her distinguished career as an epidemiologist and for her advancement of the protection of health care workers.

In recognition for her leadership in the protection of health care workers from the transmission of bloodborne diseases, the John D. and Catherine T. MacArthur Foundation named Dr. Janine Jagger as one of 24 MacArthur Fellows for 2002. Each year in the United States, more than half a million health care workers are stuck by contaminated needles and other sharp medical devices, resulting in major psychological and physical trauma. In landmark research, Dr. Jagger proved that injury risk was related to specific device design features, thereby reorienting the debate about protecting health care workers from changing their behavior to improving the design of the devices they use. In 1985, she and her associates designed some of the first needlestick protective devices recorded by the U.S. Patent Office. In the early 1990’s, she developed the Exposure Prevention Information Network (EPINet), which is now used in some 1,500 hospitals. Her research and analyses guide design engineers in their efforts to improve the safety of medical devices. Her surveillance system is employed in countries around the world. As both founder and director of the International Health Care Worker Safety Center at the University of Virginia School of Medicine, Dr. Jagger is now focusing her attention on applying the lessons learned domestically to increase protection for health care workers in developing countries. Dr. Jagger received a B.A. in 1972 from Moravian College, an M.P.H. in 1974 from the University of Pittsburgh, and a Ph.D. in 1987 from the University of Virginia. Affiliated with the University of Virginia School of Medicine since 1978, she currently serves as Research Professor of Internal Medicine. In 1996, she was named the Becton Dickinson Professor of Health Care Worker Safety at the University of Virginia’s School of Medicine by the largest needle company in the world. In addition to her MacArthur Fellowship, her honors include the Intellectual Property Owners’ Distinguished Inventor Award, American Academy of Pediatrics Virginia Chapter’s President’s Award, the Assoc. of Operating Room Nurses’ Excellence in Research Award, and the Advanced Medical Technology Association of America’s MedTech Hero Award. Inspired by her leadership and outstanding achievements, the Alumni Association and the Moravian College community are indeed honored to recognize Dr. Janine Jagger as one of Moravian’s most distinguished alumni.