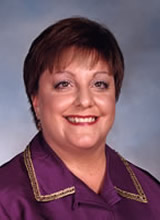 The Benigna award recognizes an alumna or alumnus for outstanding contributions to the field of education. The Alumni Association is pleased to present Carol Mooney Kemp’80 with the 2003 Benigna Education Award for her exceptional work as a middle school English teacher.

Since graduating from Moravian in 1980, Carol Mooney Kemp has been proudly dedicated to her career as an eighth grade English teacher at Old Turnpike Middle School in New Jersey's Tewksbury Township. Carol was the 1998 and 2000 recipient of the New Jersey Department of Education Best Practice Award for Innovation in Language Arts, in addition to being chosen as a 1996 Hunterdon County Honored Teacher, a 1991 New Jersey Governor's Teacher Recognition Winner, and a 1988 Tewksbury Township Board of Education's Excellence in Teaching Awardee. She was also selected for Who’s Who Among America’s Teachers in 1987, 2000, and 2002. Both CNN television and a nationwide radio broadcast featured her original interdisciplinary Victorian Unit, which also received a 1998 New Jersey State School Board Award. For over 20 years, Carol has served as advisor for the yearbook staff, dance committee, and class officers. In 1986, her eighth grade English class ranked first in the nation on the National Language Arts Olympiad, and in 2002 Carol and her husband, Edward Kemp were honored for co-directing twenty-one school musicals. Although multiple sclerosis has confined Carol to a wheel chair for over a year, she continues to model her class theme of "Be Your Own Advocate" to her students and plans to serve as an example of positive thinking to them for many more years.