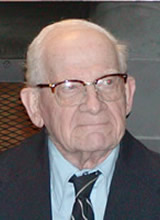 After spending twenty-five years as a mining engineer, Mayo Lanning began his second career at Moravian College in 1967. Since then, Mayo, who is now eighty-seven, has dedicated not only his professional skills but also untold volunteer hours to Moravian. With a BS in Engineering from Lafayette, and an MS and MBA in Economics from Lehigh University, Mayo used his varied background to help support the Economics and Business Department and Moravian’s expanding Division of Continuing Studies (DCS) program. After retiring from full time teaching in 1981, Mayo spent the next eighteen years counseling DCS students on a part time basis. In 1998 his work with Moravian took yet another turn when he began to volunteer as a tutor and counselor with DCS students. In addition to dedicating approximately fifteen volunteer hours a week to tutoring, Mayo also helps to proctor exams and assist professors in other ways. Since he feels that Moravian is like a second home to him, he has willingly attended numerous extra activities that involve DCS and Business and Economic students, encouraging them and wishing them well at dinners, receptions, and ceremonies. In 2002 the Accounting Club recognized Mayo with its Pinnacle Award for his contribution to the College and the accounting profession, and Dean Linda Heindel recognized him at the DCS dinner for his unwavering support of our students. Since he finds his interaction with students to be stimulating and rewarding, Mayo plans to continue making a difference in the lives of our students for many years to come. In acknowledgement of his loyal commitment to Moravian, the Alumni Association is pleased to recognize Mayo Lanning with the distinction of honorary alumnus.