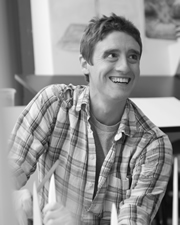 Since graduating from Moravian College with a degree in Studio Art, Jonathan Latiano ’06 has exhibited his artwork in numerous solo and group art exhibitions in cities such as New York, Philadelphia, Baltimore, Washington, D.C. and London, and has also had his work featured in local, national, and international art publications.

Latiano’s large, site-responsive installation sculptures explore elements of the natural sciences, astronomy, biology, and geology, and also investigate concepts of time and our perceptions of the past, present, and future. He is drawn to areas that exist in-between the boundaries of defined regions and strives to emphasize the moments where his artwork is physically beginning and ending. The crux of Latiano’s artwork lies within the grayer notions of the physical world and our ability to abstractly place ourselves within it.

In 2013, Latiano won the prestigious Mary Sawyers Baker Prize in Art, which led to his first solo museum exhibition at the Baltimore Museum of Art. The exhibit, entitled Flight of the Baiji, focused on China’s extinct freshwater Baiji dolphin. Latiano has also recently been awarded his first major permanent public arts commission by the City of Baltimore, which is scheduled to debut in 2017.