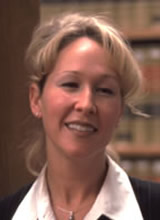 When April Major entered Villanova Law School she found that she was "in the right place at the right time." Her physics background at Moravian helped her to understand the complex issues of integrating information technology and law, and she quickly became an expert in the implications of the Internet for our legal systems. After graduation in 1996, Villanova offered her a teaching fellowship, and subsequently an appointment as a Visiting Assistant Professor. She became Director of Operations at Villanova's Center for Information Law and Policy, a think tank dedicated to exploring the intersection of law and technology and its global implications for modernizing legal systems. From 1996 - 2000, April also served as the Faculty Director of the Global Democracy Project (GDP), a program dedicated to advancing the development of civil societies and promoting the rule of law through Internet technology. GDP initiated projects in many regions of Central and Eastern Europe, Costa Rica, Rwanda, and most notably in Bosnia where the Project successfully implemented an operational Internet infrastructure through grants from the U.S. State Department and other institutions. In 1997 she spoke to the Venice Commission (the European Commission for Democracy through Law) in Brussels, where she also met with high-level NATO officials. April moved to Washington, D.C. in 2000 where she worked as an attorney for the Federal Trade Commission training investigators in techniques that would help them root out Internet fraud. During her short career, April has published numerous articles and has made extensive presentations to various institutions and commissions at state, national and international levels. She has also given various local and national media commentaries, including ABC and Fox news. Now back at Villanova as Assistant Dean for Academic Computing, she teaches Administrative Practice and continues to provide leadership in meeting the challenges presented by the use of technology and practice of the law.