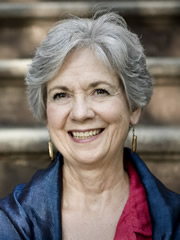 A native of Bethlehem, Kathleen F. Malu received her B.A. in religion and French from Moravian College in 1973. She now holds a Master’s in French and English as a Second Language from the School for International Training in Brattleboro, Vt. (1976) and a Ph.D. in Language, Literacy and Learning from Fordham University in New York City (1993).

Kathy attributes her first teaching placement to the fluency in French that she developed while at Moravian. Kathy began her teaching career at a high school in the French-speaking Democratic Republic of the Congo (DRC, formerly Zaire) from 1973-75 as a Peace Corps Volunteer. For two more decades, she taught English, English as a Second Language/Foreign Language, and French in a wide variety of settings including the United Nations International School and several campuses of the City University in New York City. She also re-joined the Peace Corps and served as an “inspecteur” of the nation’s high school English language program for the Ministry of Education in Rwanda.

Kathy returned to Rwanda in 2010 as a Fulbright Scholar and trained teachers in their premiere teacher training tertiary institution, the Kigali Institute of Education. She is a recipient of an award for teaching excellence from the Carnegie Foundation for the Advancement of Teaching and the National Broadcasting Company. She has authored numerous journal articles and book chapters and has been a guest speaker in a wide variety of settings.

Because of her doctorate, Kathy changed her focus to teacher training. She currently prepares K-12 teachers at William Paterson University of New Jersey. She teaches undergraduate courses in educational anthropology and literacy methods and graduate courses in reading and writing for practicing teachers. She conceptualized, designed and now teaches four courses online. The upcoming year of 2013 will mark Kathy’s fortieth year as a devoted and diverse teacher!