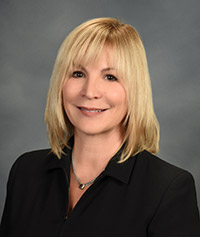 The Benigna Education Award recognizes an alumna or alumnus for outstanding contribution to the field of education. In recognition for her leadership in providing excellent support, knowledge, and guidance to her school community, the Alumni Association is proud to present Diane Sciabica Mandry with the 2018 Benigna Education Award.

Diane Mandry knows the value of a good education. She’s been in the field for 33 years, and she credits Moravian College for giving her the tools to “hit the ground running.”

As the superintendent of the Pohatcong School District in Warren County, New Jersey—a position she’s held for 13 years—Diane has implemented numerous successful programs, including a preschool program, full-day kindergarten, and before-and-after care. She keeps her schools current in technology and implemented a one-to-one Chromebook initiative to help students attain 21st-century skills.

With an eye on the environment and sustainability, she led the district in reducing its carbon footprint by engaging in a comprehensive energy audit. This resulted in several improvements in facilities, including the installation of a 500 kW solar array, which allowed the district to save money on energy costs and profit from the sale of Solar Renewable Energy Certificates. The district’s curriculum around solar renewable energy includes a visit to the solar field.

Diane is a member of the Warren County Prosecutor’s Safety Committee and the New Jersey Association of School Superintendents and has served as treasurer of the Warren County Superintendents’ Association since 2006. In 2012, Diane was selected Warren County Superintendent of the Year. Prior to her current role, Diane served as a principal in the Pohatcong School District, managing 375 students and overseeing a long list of responsibilities, including discipline, transportation, testing, attendance, and teacher and student schedules. She has also held various positions in the Easton Area School District, including assistant to the principal, language arts coordinator, and teacher; and early in her career, she taught at Phillipsburg High School and St. Jane’s School in Easton.

With everything she does, Diane fosters an approachable, warm leadership style. She aims to educate the whole student. She encourages students and staff to be individuals and reach for their full potential, and she welcomes parents in the education process. Diane is married to William Mandry, and they have a son, Thomas, who is a Moravian College freshman. She values relationships with staff and families, and she sees the importance of networking with fellow administrators in enhancing her own skills as an administrator.

Diane graduated from Moravian College in 1984 with a bachelor of arts degree in elementary education and psychology. She went on to earn her master’s degree in educational leadership from Lehigh in 2002. From the time she started her first teaching position, Diane says she had the foundation she needed to succeed, in large part thanks to the comprehensive field experience and excellent professors she had during her undergraduate years.