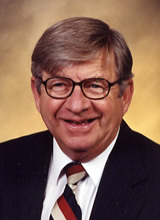 Dr. Henry E. May, received his BA from Moravian College, his M.Div. from Moravian Theological Seminary, a Th.M. from Duke University School of Divinity, and a D.Min. from Southeastern Theological Seminary. He matriculated during the years when the spirit of the man for whom this award is named pervaded Moravian’s campus.  Henry's life has reflected that spirit. A consummate leader in the Moravian church and its colleges, he has exerted a life-long influence of equal or greater significance upon the broader community and the lives of the people in the geographic areas where he has served. Something of a Renaissance man, Henry has displayed his many abilities through public leadership positions, initiation of needed service for the neglected and forgotten, exercise of civilian service, and in such tangible matters as repairing peoples' cars, hauling food/firewood to homes, and providing transportation for the elderly during inclement weather. When there's no where else to turn, many human services staff members will call Henry May. He is the founder and guiding spirit of Sunnyside Ministries services for the poor, a ministry continuing today as the social outreach arm of the Moravian Church, Southern Province. As chaplain of the Winston-Salem Police Department, he formed the Prison Ministry and was honored by NC Governor James B. Martin for this work. As chair of the Forsyth Stokes Mental Health Board, the Forsyth DSS recognized him for his work in welfare reform. He received the Distinguished Service Award from Forsyth County Council of Older Adults and was recognized as National Chaplain of the Year for his service in the US Air Force Auxiliary Civil Air Patrol as a chaplain and mission pilot. Henry has also served on 15 community boards, numerous denominational boards, and the Board of Trustees of Moravian College.  He is a credit to that commitment to community service which Moravian counts as one of its core values. Henry and his wife, Bobbie, live in Yadkinville, NC, and have four children, 8 grandchildren, and one great-grandchild.