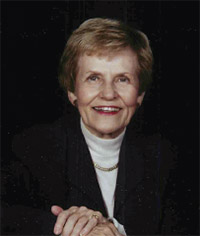 When a hospital receives Magnet designation from the American Nurses Credentialing Center, it has achieved the gold standard. Only 8 percent of US hospitals have earned this distinction for nursing excellence and quality patient care, and it’s a status that can be directly attributed to the work of Margaret L. “Maggie” McClure.

In response to the profound nursing shortage in the early 1980s, McClure led a historic effort to identify and study hospitals that were successful in attracting and retaining nurses. Her pioneering research and recommendations were the subject of the landmark study she coauthored in 1982, titled “Magnet Hospitals: Attraction and Retention of Professional Nurses.” Lower mortality rates, fewer complications, improved nurse retention, and satisfaction among patients meant that health care as we knew it would never be the same again.

Throughout her long and distinguished career, McClure has been a prolific scholar, writer, executive, clinician, lecturer, and educator. She concluded her full-time career at the New York University Medical Center, where, through the course of two decades, she served as the executive director of nursing and administrator for hospital and institutional affairs and as vice president for hospital operations. She continues to teach as an adjunct professor at the New York University Rory Meyers College of Nursing, and she lends her expertise to numerous professional nursing organizations.

McClure is past president of both the American Academy of Nursing and the American Organization of Nurse Executives. She served in the United States Army Nurse Corps Reserve and retired with the rank of colonel. McClure graduated from Lankenau Hospital School of Nursing in Philadelphia prior to earning her bachelor’s degree from Moravian College. She went on to complete her master’s and doctoral degrees at Teachers College, Columbia University.

In 2007, the American Academy of Nursing bestowed on McClure its highest honor, naming her a Living Legend. Among countless honors and awards, she received an Honorary Doctor of Humane Letters degree from Seton Hall University and an Honorary Doctor of Law degree from Moravian College. It’s only fitting that we once again find a way to acknowledge the proud accomplishments of one of our most distinguished and influential alumnae.