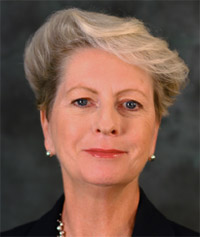 There may be a couple of hundred miles between Deborah Oplinger McKinnon’s home in Alexandria, Virginia, and Moravian College, but her alma mater is never far from her mind. In fact, since earning her BA in political science, McKinnon has long been a link between the college and the Washington, D.C., area.

For years, McKinnon has hosted receptions and dinners in her neck of the woods and was a long-standing member of the Moravian D.C. Alumni Planning Committee. She even served as the Moravian alumni representative for two presidential inaugurations in our nation’s capital.

A member of the Board of Trustees since 2008, McKinnon travels to campus often for Commencement and other important college events, and she has spoken on alumni panels about her illustrious career in federal government, finance, and nonprofit management.

In addition to her service to Moravian, McKinnon has devoted herself to bettering the world in many ways. Along with her husband, Russell, McKinnon founded the International Theos Foundation in 1999 to assist organizations that provide critical services to the underserved throughout the world. She was also president of Soroptimist International, which supports women worldwide in need of resources to start their own businesses for the betterment of the lives of girls and women.

McKinnon currently serves as executive director of the American College of Trust and Estate Counsel, a position that draws from her decades of varied professional experience, her law degree from Vermont Law School, and years of serving as an attorney-advisor in Washington, D.C., from Fannie Mae to nonprofits such as the Mortgage Bankers Association.

A proud legacy, McKinnon established a music scholarship in honor of her mother, Elizabeth Jones Oplinger ’30, who was a voice major and who passed away shortly after McKinnon’s law school graduation. She considers the scholarship one of her most important philanthropic endeavors.