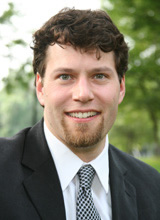 The Young Alumni Achievement Award is presented to an alumna or alumnus who has achieved exceptional success in his or her profession and who has graduated within the past two to ten years.  In recognition of his critical impact on the realm of science and health, the Alumni Association is honored to recognize Ryan A. Mehl with the 2006 Young Alumni Achievement Award.

After graduating summa cum laude with honors in chemistry from Moravian in 1996, Ryan received his Ph.D. from Cornell University in 2001. He then pursued a postdoctoral fellowship at The Scripps Institute, where he and a team of researchers worked on a project that would garner wide spread recognition in the scientific community. By the time he accepted a position as assistant professor of chemistry at Franklin and Marshall College in 2002, he was already known for his cutting edge research. In 2003 he was first author of a report published in the Journal of the American Chemistry Society about his research done at Scripps. The reseearch led to the generation of an unnatural amino acid which can be inserted into protein systems. Recognizing the vast potential for this discovery, the National Science Foundation has since awarded him with a prestigious five year Career Award. With this award, Ryan will further scientific understanding of this recently developed ability to expand the use of unnatural amino acids. His research at F&M “centers on studying enzyme function and modifying enzyme function for potential use in the fields of diagnostics, material science, nano-biotechnology, and drug production.” According to Ryan, “bridging the gap of organic chemistry and biology will create new, faster, cheaper and environmentally safe ways to produce drugs, diagnostics, and materials.”  In addition to the purchase of state-of-the-art equipment, the NSF grant will fund 15 undergraduate researchers who will participate in Ryan’s research. Their findings can “ultimately be used to better understand the interaction between medicine and proteins in the human body, which could greatly improve the efficacy of medicines.” Ryan met his wife, Aubrey Hicks ’95 while at Moravian, and they enjoy living a half block from F&M’s campus with their dog and cats.