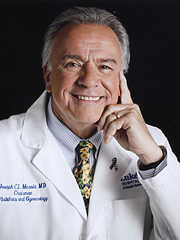 The Comenius Alumni Award recognizes an alumna or alumnus for outstanding achievement in her or his field of work. The Moravian College Alumni Association is pleased to present Joseph C.L. Merola '64 with the 2011 Comenius Alumni Award in recognition of the impact he has made on the health and well being of the community in the Lehigh Valley, particularly on its women and children.

Joseph C.L. Merola graduated with a Bachelor of Science with honors in biology from Moravian College in May 1964, followed by a year’s graduate study in physiology at Purdue University Graduate School . Following graduate school, Joseph went on to the University of Pittsburgh School of Medicine where he earned a Doctor of Medicine degree with honors in surgery, and obstetrics and gynecology. In 1999 he received a Master of Public Health from Columbia University School of Public Health, in health policy and of health services management .

Joseph always has been a member of numerous boards and committees both regionally and nationally including the board of trustees of Planned Parenthood of Northern Pennsylvania, the Development Committee for Greater Philadelphia Obstetrics and Gynecology Review Course, and chair of St. Luke’s Physician's Group. He is also a frequent moderator on the St. Luke’s medical television program “Talk With Your Doctor.” Committed to education, he is presently a professor of obstetrics and gynecology at the University of Pennsylvania School of Medicine and Temple University School of Medicine, as well as DeSales University. Joseph has several publications and book reviews to his credit and has given countless presentations locally and nationally. Among his many awards, is St. Luke’s Hospital’s 2003 Outstanding Resident Teaching Award for attending physicians, the 2012 Choice Award from  Planned Parenthood Association of Northeastern PA , and the 2010 network-wide President’s Award for healthcare performance improvement.