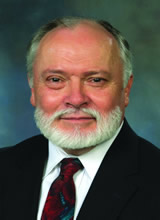 The Comenius Award is given in recognition of outstanding achievement in an alumna’s or alumnus’ field of work. In recognition of his distinguished career as a leader of environmental studies in higher education, the Alumni Association is proud to present Lloyd H. Michael with the 2006 Comenius Award.

Lloyd H. Michael ’64 of Houston, Texas, is the recipient of the Comenius Award. He received his B.S. degree in biology from Moravian, M.S. degree in physiology from Kent State University, and Ph.D. degree in medical physiology from University of Ottawa School of Medicine. Now in his 33rd year at Baylor College of Medicine, he is a professor in the Departments of Medicine, Surgery and Molecular Physiology and Biophysics. He is also senior associate dean for medical school admissions. In light of his extensive research and publications in the cardiovascular field, he was elected as a fellow in the American Heart Association. He is a director in the DeBakey Heart Center, and along with Michael E. DeBakey, M.D. has been a spokesman for responsible use of animals in medical research and is a Council member for the animal research accreditation organization, AAALAC, International.