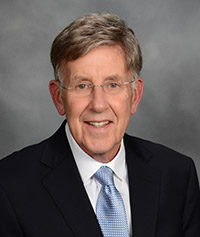 Jody Miller’s undergraduate years at Moravian College were formative. He transformed from student to scholar and became, as he puts it, “the thinking man.” Today, nearly 50 years after his graduation, he keeps giving back, not only because it’s the right thing to do, but because he believes in everything about Moravian College—its missions, its goals, and its hopes and dreams.

Walk around Moravian’s campus, and you may see Jody, clad head to toe in Moravian attire. Everyone from President Grigsby to members of the grounds crew knows his first name. He donates to Moravian in many unique ways: He’s given books to the Moravian College library, and he donated the Moravian Star that shines brightly from the top of the glass atrium of the Sally Breidegam Miksiewitcz Center for Health Sciences as well as the fountain that graces the center’s courtyard.

Jody has established six endowed scholarship funds for students and plans to start four more, and he has paid for financially challenged nonmusic majors to receive voice lessons over the past three years. Throw any question about the history of Moravian College Jody’s way, and he’s bound to know the answer. He embodies what it means to be a proud, loyal Moravian alum.

In 1985, Jody was awarded a Certificate of Teaching Excellence from the White House Commission on Presidential Scholars at Georgetown University.

At his beloved undergraduate alma mater, Jody has served on the 275th Anniversary Planning Committee, the 45th Class Reunion Planning Committee, and the planning committee for the Moravian College Antiques Show. He’s been the candle tray bearer for the Moravian College Christmas Vespers and represented his class at the inauguration of President Grigsby.

Jody gives to Moravian through his own contributions as well as in his encouragement of others to donate. His quest to give students the best possible opportunities on campus is unwavering. He’s a devoted Greyhound, through and through.