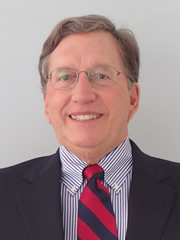 Russell E. Morgan Jr., Dr.P.H., has nearly five decades of experience in both domestic and global public health policy and management issues. In 2011, he retired after 15 years as president of the Setting Priorities in Retirement Years (SPRY) Foundation in Washington, D.C.  The foundation invests in research and education programs to support healthy aging. Russell’s work pioneered a better understanding of the potential of computer technology to support positive aging.

Previously, Russell served as the president of the Institute for Advanced Studies in Immunology and Aging from 1992 to 1996.  He was also the first president of the National Council for International Health, holding the position for 13 years. In addition, Russell held senior positions with the American Public Health Association and served as the secretary general of the World Federation of Public Health Associations. He is a returned Peace Corps volunteer (1966-69), having taught high school students in Kenya. Most recently, Russell served as chair of the Board of Directors of Encore Service Corps International, a nonprofit organization in Washington, D.C.

After receiving his B.S. in biology and chemistry from Moravian in 1965, Russell continued his education at the University of Pittsburgh, earning a M.S. in public health while also serving as class president. He later earned his Doctor of Public Health from the University of Texas. Russell and his wife, Helen-an attorney, live in Chevy Chase, Md. Their daughter Emily works in New York City in the field of education policy.