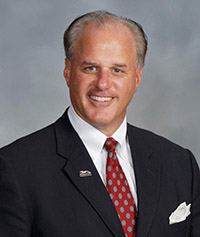 The Medallion of Merit is awarded to an alumna or alumnus in recognition of outstanding service to Moravian College or the Alumni Association.

Since he graduated from Moravian College more than four decades ago, Ken has served his alma mater in many ways. He joined the board of trustees in 2008 and was elected chair of the joint and college boards in 2012. During his tenure as chair, several major initiatives were completed, including construction of the Sports Medicine and Rehabilitation Center in 2016 and the Sally Breidegam Miksiewicz Center for Health Sciences in 2017. Under his leadership, the college also completed renovations to Comenius Hall, the Collier Hall of Science, the Haupert Union Building’s Star dining facility and Student Life suite, the Clewell Dining facility, and John Makuvek Field. Ken helped hire Moravian President Bryon Grigsby, who has brought numerous positive changes to campus.

In addition to leading the board, Ken is currently CEO of Responsive Marketing, Inc. (RMI), in Hellertown, PA, a sales and marketing agency that acts as a direct sales force for top US steel manufacturers. He is also the owner and partner of Lost Tavern Brewing, one of the fastest-growing breweries in the Lehigh Valley and Pennsylvania. Lost Tavern Brewing opened its first brewery and taproom in Hellertown in July 2016 and its second in the Moravian Book Shop in downtown Historic Bethlehem in May 2019.

Before RMI, Ken worked the first 10 years of his career in various sales and marketing positions at Bethlehem Steel Corp., after his Loop Course Training. He started RMI in 1990, and the firm eventually became the largest steel sales agency in America, representing 13 different US steel mills. Ken exemplifies a successful Moravian College graduate who never falters in giving his time, talent, and treasure to his alma mater. His wife, Anne McCandless Rampolla ’79, earned her bachelor of arts in Spanish and elementary education at Moravian and was a professor of Spanish at Lehigh University. Anne was also a Benigna Award Recipient in 2011.