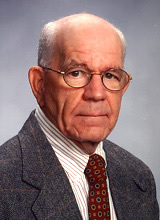 The Moravian College Alumni Association is pleased to present Jack R. Ridge '53 with the 2002 Benigna Education Award in recognition of his outstanding career as a physics instructor and professor in higher education. For forty-one years, Dr. Ridge dedicated his life to inspiring countless physics students with his passion for physics and his love of learning. His devotion to both his classroom teaching and his endless one-on-one tutorials helped to transform numerous struggling students into dedicated physicists. Many of them have attributed their success to his influence.

After graduating Summa Cum Laude from Moravian College in 1953 with a triple major in physics, chemistry, and mathematics, Jack spent one year as a scientist at E.I. Dupont. He then pursued his career in higher education, completing his M.S. in physics from Lehigh University in 1956. From 1954 to 1956 he served as a graduate assistant at Lehigh and an instructor of mathematics and physics at Moravian College. At the same time, he and his wife, Laura, were also house parents at Moravian's Clewell Hall. Dr. Ridge completed his PhD in physics from Lehigh University in 1965. He was chair of the Moravian College Physics and Earth Science Department from 1959 until 1995, and was Moravian's Louise E. Juley professor of science from 1993 to 1995. Although he retired in 1996, Jack continues to have a presence on campus as professor emeritus.

Dr. Ridge was a National Science Foundation Faculty Fellow, a member of the College's Board of Trustees, and the recipient of Moravian's Lindback Award for Distinguished Teaching. He and Laura have two children and four grandchildren.