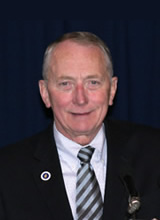 President Rokke is being honored for his nine years of service at the helm of the College and Seminary. His presidency has been marked by widespread institutional change that has included significant increases in both the quality and quantity of the student body, revised curricula and new academic programs, and major improvements to campus infrastructure. Mrs. Priscilla Payne Hurd, Chair of the Moravian Board of Trustees, recently observed that “Erv Rokke has been one of Moravian’s finest and most successful presidents. Even by the standards of an institution that has existed for 264 years, his leadership, his integrity, and his achievement are extraordinary. By a huge measure, he has raised the quality of our students and programs, he has raised new buildings on our campuses, and he has raised our hopes and ambitions for an even brighter future. For nine very good years, we have been blessed and honored by his leadership and by his friendship.”

Before his appointment as Moravian’s president, Dr. Rokke completed a 35-year military career distinguished by operational, diplomatic, and academic leadership positions. He retired at the rank of lieutenant general in 1997 while serving as President of the National Defense University in Washington, D.C. Rokke graduated from the U.S. Air Force Academy in 1962 and earned his master's degree and doctorate from Harvard University.