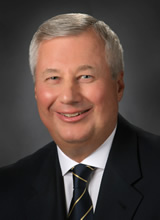 The Comenius Award recognizes an alumna or alumnus for outstanding achievement in his or her field of work.  In recognition of his distinguished career in the development of consumer packaging closures, the Alumni Association is proud to present Eric S. Ruskoski with the 2009 Comenius Award

Eric S. Ruskoski ’69 is honored for his pioneering and innovative developments in the field of “convenience closures” for the worldwide consumer product package industry.  He received his B.A. in English from Moravian College and did graduate work in English literature at the University of Maine.  Eric carries a passion for teamwork learned during his student days as a member of the Moravian football team. Now, as the president of AptarClosures, and an executive officer of AptarGroup, Inc., a Forbes 400 company, he imparts those principles to developing and manufacturing various types of dispensing closures and systems for global marketers of consumer products, such as Procter & Gamble, Unilever, HJ Heinz, and L’Oreal.  Eric and his team have commercialized many first-to-market ideas for the personal care, household, squeezable food and beverage packages, such as the patented “top on the bottom” Heinz ketchup package, flip-top toothpaste caps, tube tops, and press-to-open caps. The Aptar Closures dispensing caps are produced by his company’s more than three thousand employees in thirteen plants worldwide.  Employed more than 37 years in his chosen field (33 with Aptar Closures), Eric now finds his greatest challenge to be developing next generation multicultural leaders, adapting the organization to changing global market forces and developing commercially successful product innovations.  He resides in the Chicago suburb of Deer Park, Illinois with his wife, Sandy, son, Thor, and daughter, Chelsea.