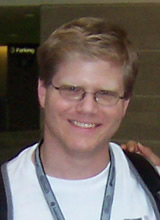 When Jens Scott became a graphic design student at Moravian College, he had already begun his cutting edge career in computer graphics. While he obtained his bachelor’s degree in Studio Art, Jens used his superior skills in computer systems and computer graphics to serve as an instructor and advisor at both Moravian and the Baum School of Art in Allentown. After obtaining his BA from Moravian in 1994, Jens enrolled in the School of Visual Arts in New York City for an MFA in Computer Art and Animation where he also served as an instructor and an advisor. Upon his graduation in 1996, Jens began a colorful career which has placed him at the cutting edge of all aspects of computer graphics production. He has applied his skills as a 3D graphic artist, 3D animator, and production developer and supervisor to a variety of children’s videos, movies, TV shows, and, as a hobby, aviation. He recently provided virtual sets and props for 52 episodes of the Disney Channel’s Book of Pooh and served as the computer graphic supervisor to Nickelodian’s Lazy Town, which took him to Iceland for 3 months. He is currently working on the pilot of PBS’ Big, Big World, Mercury Film Works' Babytown and Sony Pictures' Monkey King. Jens' business, 3D General, focuses on computer graphic production of all kinds and is based in West Virginia. Since 3D General also has offices in the Ukraine, Jens’ work includes numerous trips abroad. The son of a race car driver, Jens’ most recent ventures include teaching antiterrorism driving techniques and race driving techniques. Jens is a pilot who not only flies planes, but is also building an experimental helicopter, designed by BJ Schramm. Technology has played an important role in Jens’ personal life as well. After he and his wife Angela met on the internet, she and her son Max emigrated from their country of origin, Moldova, to be with Jens in the USA. Now married and living in Virginia, Jens and Angela are expecting their second child in May of 2004.