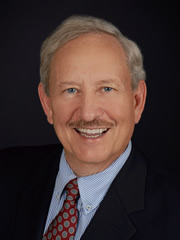 The Comenius Alumni Award recognizes an alumna or alumnus for outstanding achievement in her or his field of work. The Moravian College Alumni Association is pleased to present James M. Stevens '73 with the 2013 Comenius Alumni Award in recognition of his exceptional career as an entrepreneur with corporate discipline.

James M. Stevens Sr. is chairman of J.M. Stevens & Associates, Inc., a beverage industry consulting firm established in 1997 that specializes in strategic business development, brand building and multi-tiered distribution systems. His beverage experience, ranging more than 45 years, includes introducing Perrier to the United States in the 1970s, which established bottled water as a beverage category of its own.

With his Perrier co-founder, James started Dutcher Crossing Vineyard & Winery in Sonoma County, Calif., in 2001. In 2000, while continuing his consulting firm, he served as president and CEO of the Danone Water Company of North America. From 1992 to 1996, James was president and CEO of the Suntory Water Group, facilitating its growth to become the nation’s second largest bottled water company and the official bottled water of the 1996 Olympic Games in Atlanta.

In 1986, James joined Coca-Cola Enterprises, eventually becoming the bottling company’s executive vice president and COO, before leaving for Suntory. Prior to joining Coca-Cola, James served as president of Prestige Wine Imports. Additionally, he has served as senior vice president of Perrier, establishing its U.S. and Canadian sales and distribution network, and held key management positions with Pepsi-Cola Bottling Group. In 2000 James joined with the environmentalist Robert F. Kennedy Jr. to develop and promote his RiverKeeper clean water project.

James was honored with the first Lifetime Achievement Award from the bottled water industry at the 2012 annual Berkeley Springs International Water Tasting. James received his B.A. in management from Moravian in 1973.  This year James celebrated his 40th wedding anniversary with Linda Joseph Stevens ’73.  They live in Bluffton, SC.