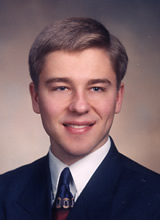 The Emerging Leader award is presented to an alumnus or alumna who graduated within the last 10 years for his or her dedicated service and leadership to Moravian College. The Alumni Association gratefully acknowledges Bob Thear ’98 for his exemplary service to Moravian.

As a student at Moravian, Bob Thear contributed a great deal to campus life. A member of the cross-country and track teams, Bob helped lead Moravian to six Middle Atlantic Conference (MAC) titles, including four straight in cross-country. In 1995, he was the MAC Champion in the Steeplechase and also earned All-MAC honors in cross-country. In addition to running, Bob gave tours as a member of 26 Points, was an active member of the Accounting Club, served on the Comenian staff, and was a Student Advisor for incoming freshman. Bob’s accounting internship through Moravian led to his current position at Guardian Life Insurance in Bethlehem, where he has worked as an Internal Auditor for the past five and a half years. During this time he also earned his CPA certification. After receiving his BA in Accounting in 1998, Bob remained very active in the Moravian College community. For the past four years, he has been a member of the Young Alumni Board, and he currently serves as their Vice-President. As such, he not only helps provide leadership in engaging young alumni, he also helps develop student-focused programming and represents the Young Alumni Board on the Alumni Association’s Executive Committee and its Board of Directors. In addition to his board related activities, Bob frequently visits the campus to speak to students at a variety of venues about his career and life after college. Each semester he mentors accounting majors who intern at Guardian Life Insurance. He has become a familiar face at numerous events such as the Accounting Club dinner, Mardi Gras, the Career Networking Reception and the Lehigh Valley Freshman Welcome Picnic. As a former athlete, Bob is a staunch supporter of Moravian athletics and can often be seen on the sidelines of cross-country meets or in the stands at football and basketball games. Outside of Moravian, Bob is a 13-year volunteer at Musikfest, a former member of the Parkland Area Jaycees, and a marathon runner. We are grateful for Bob’s dedication and support of his Alma Mater, which provides a standard for all alumni of Moravian College.